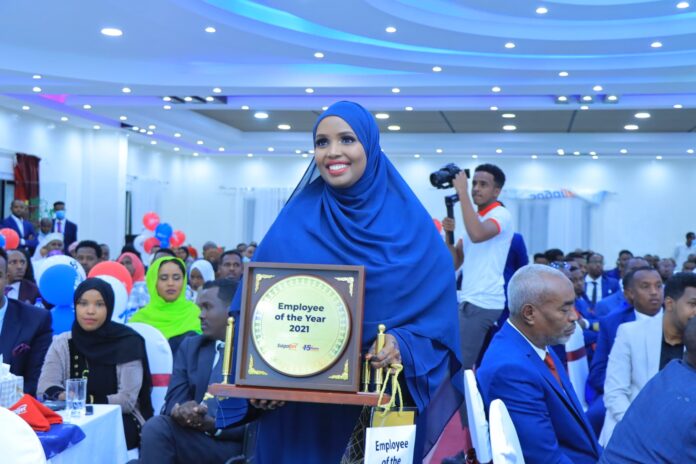 SAGALJET Company, which is celebrating its 15th jubilee, has been hailed by the Somaliland community and guests of honors for their achievements.

This year’s event testified that femaleness or maternity does not bar women from competing with their peers, as SAGALJET’s girls outdid their male counterparts in terms of hard work, & dedication, by earning the highest and most prestigious EMPLOYEE OF THE YEAR award.

Apart from the efforts and history of the company, many a speaker described it as an example of change and progress that is worth being put in journals of achievements.

So, thinking about it, I heard young people at a tea party talking, “Isn’t it weird that SAGALJET is celebrating its 15th anniversary?” while another replied “and its establishment seems just the other day!”

I felt that the achievements of this institution were noteworthy, giving the interests gauged in public cafeteria joints.

SAGALJET functioned since 2007. It has just awarded acknowledgement presents to their employees.

A social public opinion included, “we all want to celebrate with Ugbad Abdirashid Hussein who won the best employee award of the SAGALJET 15th anniversary event”.

“Cheers to all SAGALJET Company staff for the event. I would like to extend my special compliments to my colleague, Chairman Mr. Abdi Yusuf Aar, who has put a lot of effort into getting the Company to this level.” was an opinion of another.

He expressed his secret to good acumen in leadership by revealing that he was not only interested in the work improvement of the employees but also have a great desire to improve their lives and to share any joys or sorrows arising thereof! What a rare leadership skill in this part of the world.

This is a pledge which would truly touch and inspire the employees, and gained mileage that the company will not forget them and families even at the time of sorrows.

Speaking about the company’s vision, he posed, “What do we look to in the future or next decade?”, and continued, “You all aware that the SAGALJET has created jobs for over 300 young people, mostly university graduates, and in the next 10 years we will aim to create jobs for 3,000 young people”.

“We aim to make the company fully accessible in all neighboring countries, of which we currently have some offices”, he said.

SAGALJET Chairman recalled challenging and joyful times, where he attested unforgettable events. He detailed how important staff lost their lives while in line of duty, naming Suleiman Abdirahman and Abdirahman Farah, may God have mercy on them and both their colleagues who sustained injuries, and were present with them at the event.

He also underscored the fact “that no matter the struggle of a company, government or other institution of work, there were always people who sacrifice their lives in lines of duty’ hence the company will not forget the people.

As a good gesture as some family members of deceased staff were employed in the company.

“What also needs to be said about how long the company has been operating and the greatest joy it has achieved? I can say ‘My happiest time is tonight?’ as we have together achieved the progress we were aiming for the last 15 years”, said the CEO.

SAGALJET pens on its website: “Finally, congratulations to everyone who won tonight, everyone who attended tonight’s event, thank you. Together we will work for the future Allah will.