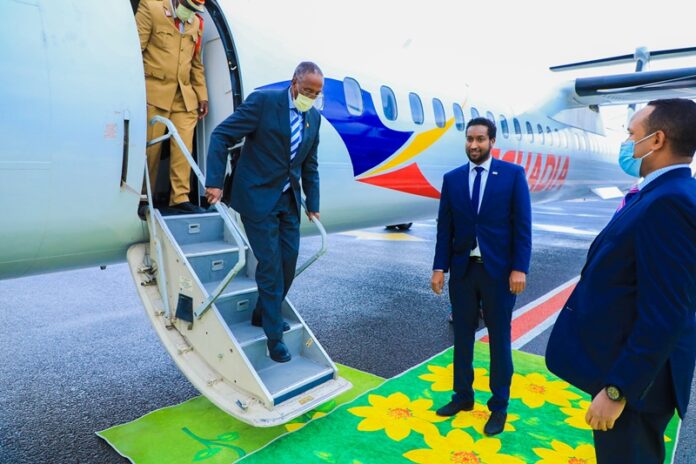 The President of the Republic of Somaliland H.E Musa Bihi Abdi was rolled out a red-carpet welcome on Tuesday once he arrived in Addis Ababa. Ethiopia’s Finance Minister, Ahmed Shide accompanied by State Minister for political affairs of the Ministry of Foreign Affairs of Ethiopia, Mr. Redwan Hussein, have greeted Somaliland delegation headed up by President Musa Bihi Abdi upon arrival at Bole Int’l Airport.

The delegation led by the president of the republic of Somaliland was joined by the FM, Dr. Essa Kayd Mohamud, transport minister and Ms. Adna Adan who were in Addis Ababa to prepare the ground for the official trip of the president. The Head of State is expected to hold high-level talks with Ethiopian PM Abiy Ahmed, who has extended an official invitation to Somaliland leader. Issues that will be high in the talks include Ethiopian plans to take over the strategic port of Zayla’ on the Red Sea. The President is due to hold discussions with other senior Ethiopian government officials.