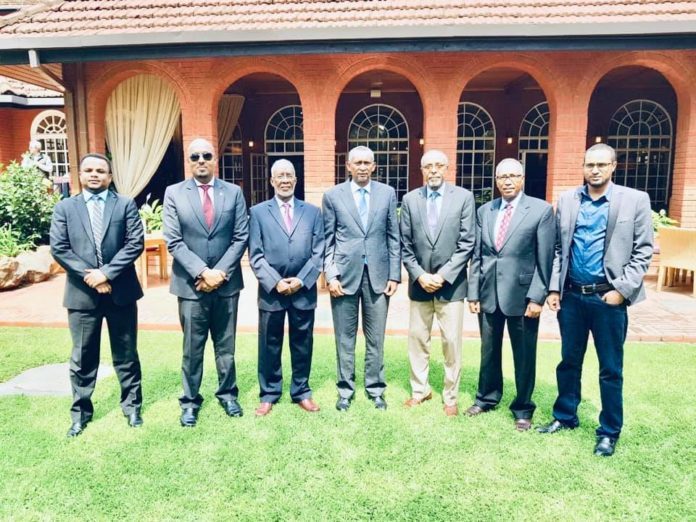 The Republic of Somaliland, a self-declared state, internationally considered to be an autonomous region of Somalia will hold a consensus building meeting for Somalia-Somaliland dialogue process in Nairobi, the capital of the Republic of Kenya, East Africa’s power house and largest economy. The venue, though viewed skeptically by players in Mogadishu remains a choice destination for many regional organizations and countries. This comes as the maritime border row with Somalia continues to simmer.

Top officials from Mogadishu including the Assistant to President Farmaajo’s Chief of Staff Abdisatar Gelle and the Chief of Staff Nur Dirie, himself will attend. European Union Special Envoy for the Horn of Africa Alex Rondos will be in attendance at the Windsor Golf and Country Hotel. The meeting is largely a European Union, Britain, Turkey, and IGAD affair and their staff wouldn’t have opted for a better option than Nairobi itself despite protests by Mogadishu that the grounds were not neutral.

The meeting will review facilitation efforts between Somaliland and Somalia and highlight key success and failures to date. It will also review the current situation in the war torn Somalia where the Al-Qaeda branch in Somalia, Harakat Shabaab Mujahideen seeks to overthrow the Farmaajo administration. Mogadishu has objected sovereignty of Somaliland and hopes to discuss this position in the meeting.

However, one of the most important sessions will be the discussion on regional Horn and Red Sea dynamics and the implications of for the Somalia- Somaliland process. Mogadishu claims the tensions are largely believes the tensions are factored by external actors. Somaliland has been recognized by various organizations and countries as an autonomous state. The delegates will also discuss the growing tensions with neighboring states including Republic of Kenya. Mogadishu is worried that Kenya is likely to become hostile a move that can eventually badly destabilize Somalia and cripple the gains made in the recent past. Mogadishu hopes participants will explore what incentives exists for parties to re-engage in dialogue and whether the political will from within the region and international community is sufficient to support renewed dialogue efforts.