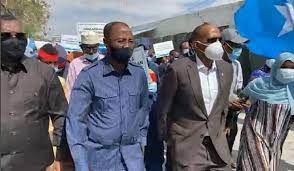 A demonstration against the outgoing President Mohamed Abdullahi Farmajo, which was scheduled for Thursday, has been postponed after authorities in Somalia’s capital said they would not accept any rally to be held in the capital and threatened that they will quell it.The Security Minister on Wednesday authorized the protest and asked the government troops to safeguard security of the demonstrators.

Authorities of Banadir region, including the mayor of Mogadishu Omar Filish and police officials had met a day earlier and discussed efforts to prevent the rally from taking place in the city. Speaking to media, they called the protest as a criminal act.

Banadir authorities’ remarks and the letter of the Security Minister have showed how a power fight between the President and Prime Minister affected government institutions, as the mayor Omar Filish and Security Minister Abdullahi Mohamed Nur are separately loyal to each men. The dispute has also divided security forces along clan lines despite warnings by their commanders to stay out of politics.

Traditional leaders of Hawiye tribe told a press conference on Wednesday that the rally was postponed following a meeting with organizers, who also confirmed they had accepted a request from the elders.

In a statement, opposition leaders welcomed the move and condemned remarks by the mayor of Mogadishu criminalizing the protest in a violation of citizens’ constitutional rights.

There are reports that the opposition leaders, some of whose members have recently been accused of collusion with the President, split over the rally in which organizers said would be held to support the Premier and condemn an attempted coup allegedly orchestrated by Farmajo last month.

In February last year, security forces attacked a demonstration against delayed elections after the President’s term expired, triggering an exchange of gunfire with opposition forces marching alongside the protesters. Fear of similar violence is one of the main reasons behind the delay to the march scheduled for Thursday, according to opposition figures.