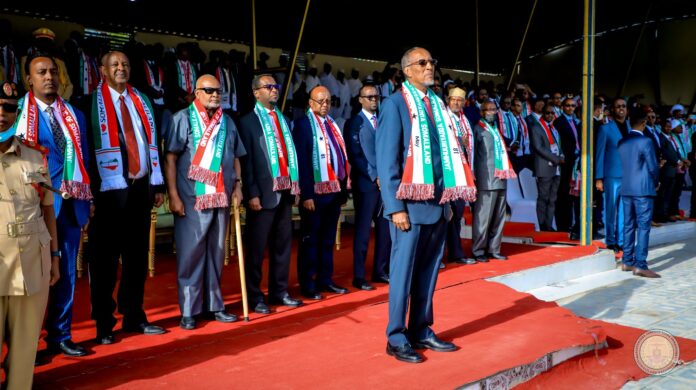 The ceremony was attended by the President of the two chambers of Parliament, the Chief Justice of the Supreme Court, members of parliament, cabinet members, delegates from neighboring countries and around the world, military commanders, civil society organizations, politicians and dignitaries. community members and other dignitaries, and there was a spectacular display of national anthems on May 18th.

Various sections of the society, the education community, the districts of the capital, the sports teams in Hargeisa wearing the flag of the Republic of Somaliland, marched in groups, which showed a sense of patriotism.

Various battalions of the national forces, dressed in military uniforms, marched through the square, were highly clapped by the crowd watching on the various streets of the capital and all the guests who attended the ceremony.

In addition, the various forces of the Republic of Somaliland displayed a variety of modern vehicles, including trucks and other types of heavy weapons, which the troops use against the enemy of the country.

The President of the Republic of Somaliland, H.E. Muse Bihi Abdi, addressed the nation, congratulating the people of Somaliland on the occasion of the 18th of May, and outlining the reasons behind the secession of Somaliland to reconsider its own destiny and gain its independence and the fruitful struggle of the people to free themselves from the tyranny of the long-fought dictatorship.

The president said that the government of Somaliland came from the will of the people, and they decided to build a full nation and become part of the democratic governments in the world. He urged the youth of Somaliland to take advantage of their time, build their country, use their knowledge to the benefit of their country and people, and take responsibility for their own land.

He called on the Somaliland community to be prepared for climate change that has affected the world, advising them to change their way of life, to adapt to climate change.

The President underlined that Somaliland is a nation of peace and co-operation, and good neighborliness.

“The principle of our policy is to bring peace and harmony to human beings wherever they are, starting with our neighbors, the Horn and the world.”

Finally, the President called on the people to work for unity and solidarity, and to give priority to the development and reconstruction of their country.