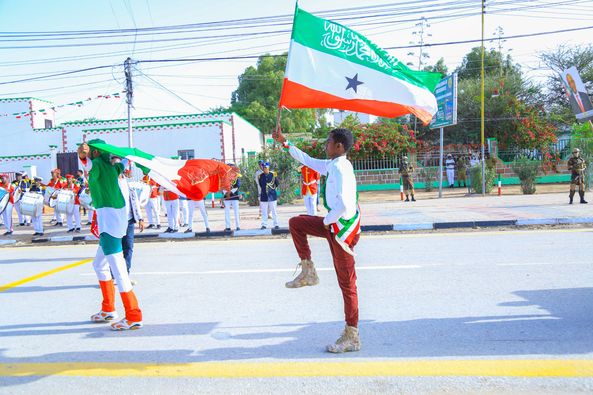 Millions of people in the Republic of Somaliland today celebrated 31 years of national day in all regions and districts of the country.

The President of the Republic of Somaliland, H.E. Muse Bihi Abdi, were saluted different battalions of the national army students from schools and other civil society groups marched in front of the anniversary square.

All sections of the society were dressed in the flag of the Republic of Somaliland, and their faces were full of joy and happiness.

The various national forces marching in the square were greatly appreciated by the community and the participating leaders.

The police force was particularly well-received by the community for displaying battalions marching the square and new military vehicles, as well as the cavalry units.

The event was attended also by the foreign nations diplomats with embassies in Hargeisa, like Taiwan, Ethiopia, Djibouti, Turkey, Kenya, and the United Arab Emirates.

President Muse delivered a moving speech at the end of the event.

The Republic of Somaliland officially withdrew from the union Somali in 1991 and regained its independence and sovereignty.