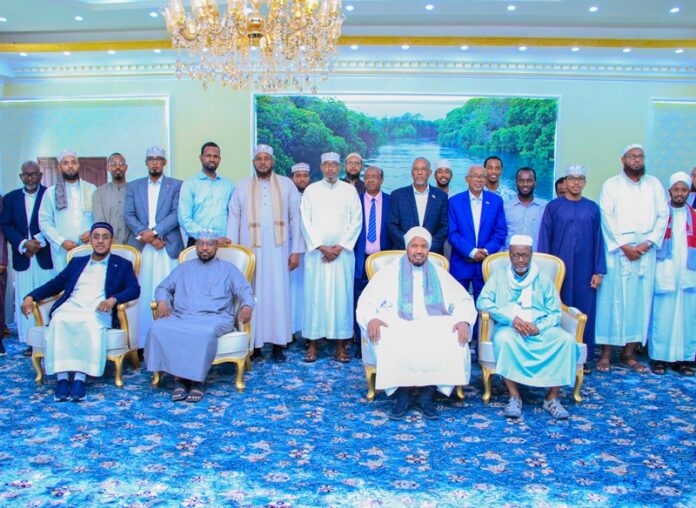 Welcoming the Somali religious clerics, the Minister of Endowments and Religious Affairs, Sheikh Khalil Abdullahi Ahmed spoke at the gathering and welcomed the scholars from neighboring countries and around the world, while thanking them for the religious sermons they have so far delivered to the populace.

The gathering was also attended by prominent Somali scholars including Sh Abdirazak Abdillahi General Jiir, Sh Abdirashid Sh Ali Sufi, Sh Almis Yahye, and Sh Mohamud Mohamed Halike along with other well respected scholars. After thanking the President for his warm welcome, they praised the Republic of Somaliland for its peace, security, and the unity that holds its people and government together. They were also quite taken with the communities interest in learning about Islam.

His Excellency, the President of the Republic of Somaliland, Musa Bihi Abdi, welcomed the clerics who have recently attended the religious summit held in Somaliland, and stated how delighted he was to see the good deeds these scholars have brought to the country. In his note, the President said, “All thanks to Allah, who brought all these scholars to us as they shared their time, knowledge and prayers with us. I want to extend my sincere appreciation and gratitude to them, and may their spiritual lectures always remind us of the Hereafter and to always serve in the best interests of Islam.”

In his remarks, President Bihi called on the religious scholars to pray for our nation in the face of divisions and advise them to always maintain Islamic virtues of unity. May peace, mercy, and blessings of Allah be upon you.