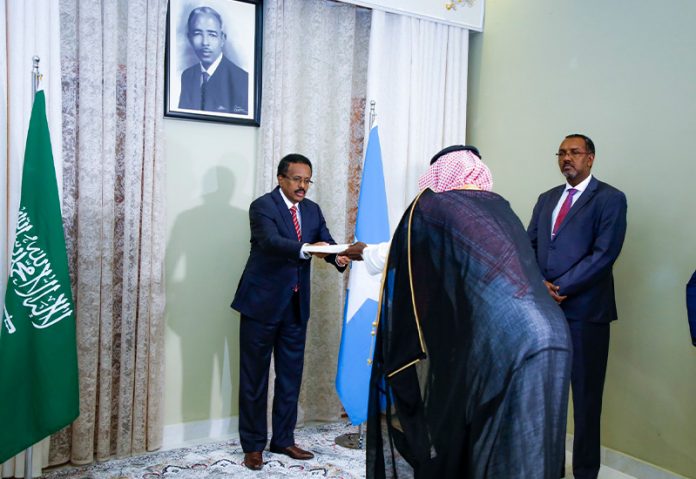 Farmajo and Al-Muwallad shook hands at a ceremony whereby the new ambassador appointed by Saudi Arabia to Somalia presented diplomatic credentials, years after the countries severed ties over row between Gulf Arab countries.

In 2017, the government of Somalia’s incumbent President Mohamed Abdullahi Farmajo refused to take sides with Saudi Arabia and the United Arab Emirates in a row with Qatar and instead sided with Doha. A $9.6 million from the UAE was seized at Mogadishu Airport in 2018, in a sign of worsening spat, though Somali Prime Minister apologized to Abu Dhabi this month and said he would return the cash.

“President Mohamed Abdullahi Farmajo received the credentials of His Excellency Ahmed bin Mohamed Saleh Al-Muwallad, the Ambassador of the Kingdom of Saudi Arabia to the Federal Republic of Somalia,” the office of Somalia’s President tweeted on Wednesday.

“His Excellency assured Ambassador Ahmed bin Mohammed of providing all support to advance bilateral relations between the two brotherly countries.”