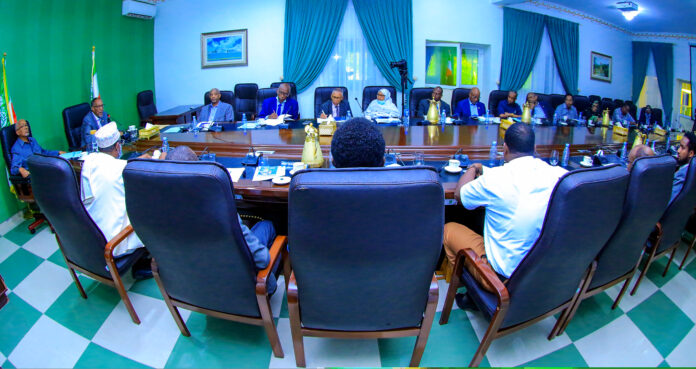 The President H.E. Musa Bihi Abdi has once again cautioned the civil servants and security services personnel not to indulge into any acts of politics or seen to be politicking.

The Head of State reiterated the need of upholding the laws of the country as spelt out in the constitution.

The warning was contained in a press release from the Presidency that concerned the latest Thursday weekly council of cabinet meeting on the issues focused and deliberated upon.

The statement largely noted that the state has fully organized, mobilized and put into gear all pre-requisites need for holding of the due elections in which the polling is earmarked on 31st of May, thus only a week away.

The cabinet learnt that the funds for security matters have been doubled, given reflections of past elections.

11 thousand security personnel have been posted to all parts of the country, including the territorial borders.

In the same breath, the treasury has disbursed all the funding set for the electioneering exercises process.

The President acknowledged that the exercises were a monumental task, which needed expediency, hence has to go well without any unnecessary hiccups whatsoever emanating from any envisioned quarters.

Likewise, the president urged all politicians to exercise their deserved political rights as per constitutions, hence uphold unity and peaceful stability.

He equally reminded the cabinet fraternity of their political allegiance hence called upon them to mobilize the electorate in their constituent regions hence operate within the margins of upholding national stability.

It is worth noting that the soaring numbers of security and associated personnel corresponds to the additional polling stations numbering 2800 this election year.