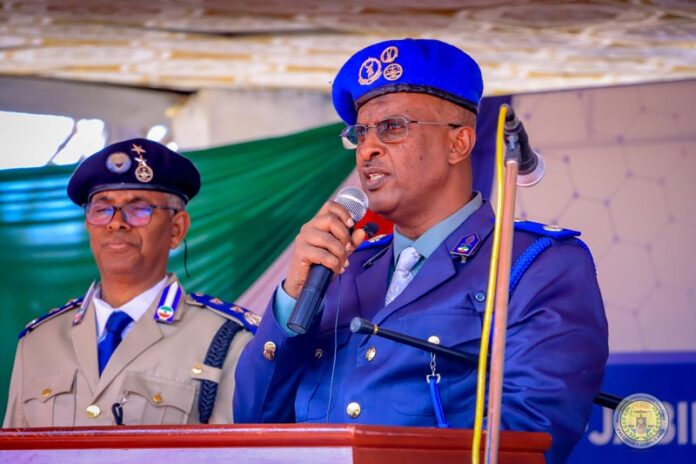 The Commissioner of Police Major General Mohamed Adam Saqadhi has confirmed that the security of the country is tight as he revealed that the fight against drug abuse and rape is in full gear.

The Commissioner of Police stated this during an exclusive interview with Universal Television whereby he highlighted the work of Somaliland Police Services.

The police boss informed that the Police spend sleepless nights to guarding Somaliland regions and districts against breach of peace.

He reiterated the importance of Police and the community to working together.

The first incident was when two men armed with daggers accosted a young girl, they mugged her of her mobile phone, upon reporting the crime at Central Police Station in Hargeisa, and the police acted immediately, apprehended the perpetrators, and recovered the stolen mobile.

In the second incident, an old man reported the loss of his 10-year-old son to Hargeisa Central Police Station. The chief of Police operations Lieutenant Colonel Abdiaziz Mohammed Ismael momentarily liaised with Radio Hargeisa to announce to the public the loss of the youngster, soon the boy was found and handed to his father.

Stating that, that criminals under the influence of drugs such as alcohol commit most crimes, and bhang being the catalyst of rape incidences in the country, Gen Saqadhi reiterated vigilance by law enforcers nationwide.

The country’s top law enforcer   attributed the improvement of the Somaliland police service being at its best Ever to the president Bihi modernization program that involves supply of new equipment’s like vehicles, computers, state of the art buildings, new uniforms and regular trainings.

He said that the police have also introduced community policing which has helped the force build rapport with members of the public.

In conclusion, he revealed that the Somaliland Police is initiating reforms, which will bring wide-ranging changes into the force.