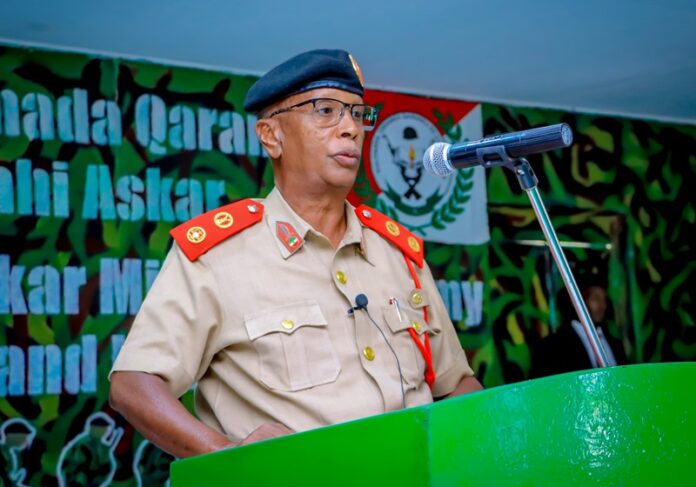 The intensified training of senior soldiers was spearheaded by the shrewd leadership of the President H.E. Muse Bihi Abdi.

In a speech delivered over the week by the Commander of the Somaliland Armed Forces Major General Nuh Ismail Tani at a graduation ceremony for military, coast guard, police and intelligence officers at the Abdilahi Askar Officers’ Training College, he described the process by which soldiers become officers, as a successful scheme.

“These soldiers struggled, hence need to be promoted was the idea of President Muse” said the forces chief.

Elaborating on the graduating of the new crop of officers, Gen Tani said the men and women were made up of three divisions, technicians in tanks, artillery and transport as well as medical officers who had completed three years of training in Ethiopia,.

He wholeheartedly thanked a female doctor who was part of the previous batch of national service, who was on maternity leave, for her outstanding service to the cadet’s health.

Commander Tani, recalling the graduating officers on duty during his tenure as an officer, said much was not permissible, as of now, adding that in his time, officers were not allowed to sit in restaurants, or behave immaturely.

“If an officer wanted to get married, he/she would have to request in a letter and either allowed or denied as per merits, said Gen Tani as he revealed that the President and Minister Kahin both former army colonels and I entered matrimony in such manner.

On forces code of conduct even training manuals were tightly kept secrets, as opposed to prevalent status where things are different now said he.

He explained that the role of officers is to lead by example and urged them to pass on the knowledge they have acquired to the soldiers, and to show compassion in the event of a crisis.

“Soldiers, be kind in times of trouble, and don’t break the law, enforce it.