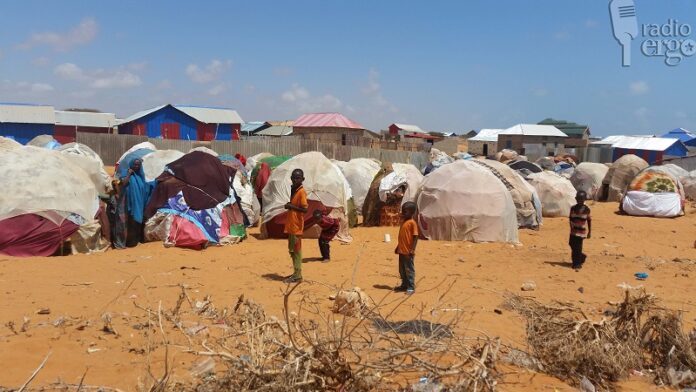 As part of our IDP Camps series, Radio Ergo spoke to impoverished pastoralist parents in a remote camp in the northern Sool region about their fears for the future of their children. The camp has no school and the children are falling into risky activities, according to the parents, because they have no education and no future.

Mohamed Yahye, a father of nine, is worried about the future of his children, who have been growing up in a displacement camp in the northern Somali region of Sool, since the family’s livestock all died in the drought three years ago.

The camp in Darya-geesawayn village, in Hudun district, has neither school nor health centre.  Parents say there is nothing for their children to do and their future looks bleak.

Yahye, who has eight daughters and one son aged between six and 16, said the children used to be busy looking after the animals, but now they roamed around the village engaging in risky activities.

“To my knowledge, last month alone, two children fell into a well in the area but luckily they were rescued though they suffered injuries. Some of the children turned to drugs with some using hashish and others starting chewing khat,” he told Radio Ergo.

Darya-geesa-wayn lies 20 km from the frontline of recent clashes between Puntland and Somaliland forces, who are contesting control of the area. The nearest school is in Hudun town, 40 km away.

Parents fear their children risk being recruited into the armed forces because they are idle and lack education, and the military might seem exciting.

The camp elders say 220 families live in the camp, with a total of around 300 school-age children without access to education.

Some parents in the camp told Radio Ergo that about 20 children had gone off to join the armed forces. Yahye said he knew five, who had been calling on other children to join them in the army.

“We are worried that our children are lured into these forces, because the children have nothing to do. This challenge adds to the daily problems,” he said.

“We have no money to send our children to school and parents have no capacity to build their own school.”

Another parent, Safiya Barre Gelle, who has been living in the camp for two years, fears that her children could end up joining gangs because of the lack of opportunities.

A month ago, her 10-year-old son broke his leg in an accident and she had to borrow $1,000 from a relative to take him for emergency medical treatment.

“The children are just moving up and down, they have no education; our main concern is these wells which have no cover and are as deep as 24 metres, and our children normally play near these wells,” said Safiya, a mother of seven.

Safiya lost over 290 goats to the drought in 2017, which forced her to flee Shimbiralay village, 15 km away. She said she received $70 from an aid agency in October, but she did not know the name of the agency.

Yahye, like most families, ekes out a living on small handouts from his relatives in Hudun. In the camp, families help each other with the little they have but meals are irregular and inadequate.