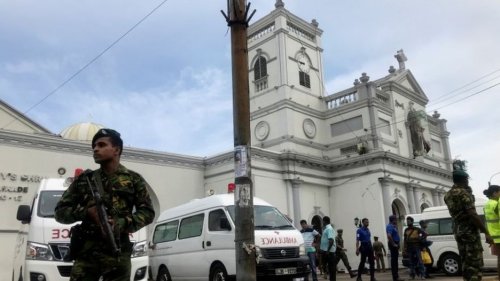 Apr 21, Colombo: At least 137 people have been killed and over 400 are injured in explosions at churches and hotels in Sri Lanka, police and hospital sources say.

A series of coordinated bomb attacks targeted three churches in Colombo, Negombo and Batticaloa during Easter services and three hotels.

Bombs exploded at the St. Anthony’s Church in Kochchikade, St. Sebastian’s Church in Katuwapitiya, Katana, and Zion Church in Batticaloa while hotels Kingsbury, Shangri-La and Cinnamon Grands came under attack.

Nine foreigners were among those killed in the explosions in Colombo, according to the National Hospital sources.

According to local media 67 people have died at the St Sebastian’s church in Negombo and the church has suffered severe damages.

At least 27 people have died at the Batticaloa church, Hospital sources in Batticaloa have told the BBC.

A popular chef Shantha Mayadunne and her daughter have died in the explosion at Shangri-La hotel, the Sri Lanka Rupavahini reported.

No group has yet claimed responsibility for the attacks.