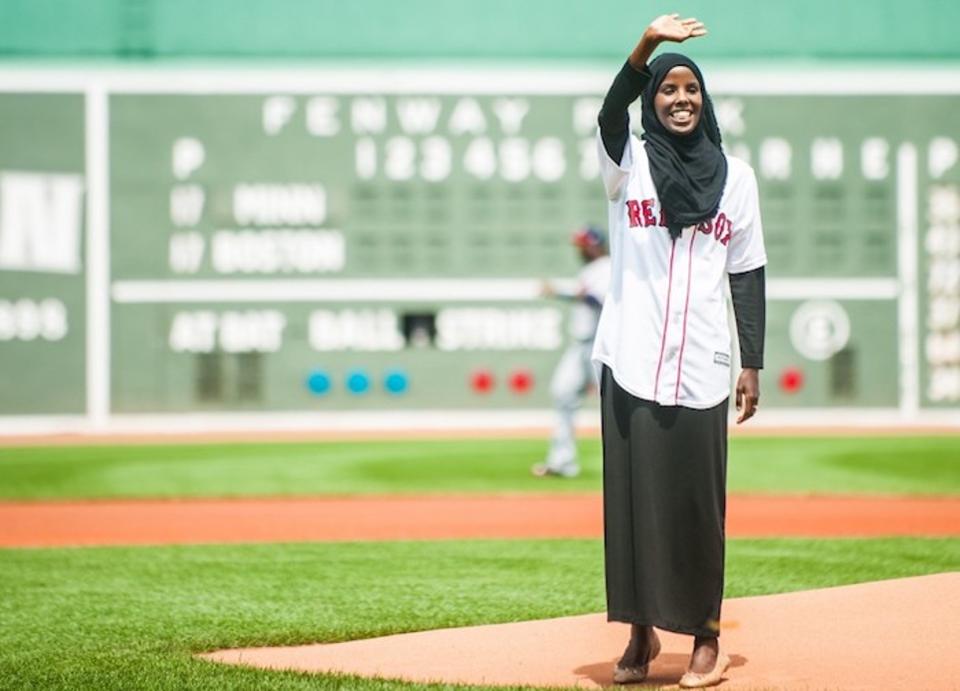 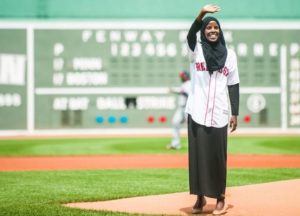 After spending her early years in a Kenyan refugee camp, Somali-American Hamdia Ahmed is now studying political science at the University of Southern Maine. The 20-year-old has made a name for herself advocating for the rights of refugees and migrants. Here, she shares her family’s dramatic story and explains why giving back to others is so important to her.

Where did you grow up?

HAMDIA AHMED: I stayed in the Ifo Refugee Camp in Dadaab, Kenya from 1997 to 2005, when I was seven years old.

HAMDIA AHMED: Living in a refugee camp was really stressful and traumatic, but I also have some good memories. We all arrived at the refugee camp to escape from the Somali civil war. We wanted to rebuild our lives. Many of us started over with nothing. I attended school and helped my mom with chores. I played with my friends from school. We didn’t have playgrounds like the ones in the U.S., so we basically played with dirt and made dolls out of sticks.

Besides these few good memories, living in a refugee camp was not easy. My family experienced so many traumatic things in the camp. My mom was physically assaulted when she was protecting my sister from a man. I remember seeing blood pouring down my mother’s face, and my older sister and cousin rushing her to the hospital. It was a scary scene to witness, but I couldn’t fully understand the situation because I was so young.

One night, we were sleeping outside the house because it was really hot inside. While we were asleep, a man decided to break into our little fence and hold a knife to my mother’s stomach. I was sleeping next to my mother and it was one of the scariest things I’ve ever experienced. I woke up screaming after I heard my mother scream. The man ran away because the neighbors started running to our house to check on us. I am so thankful we didn’t get hurt.

What do you remember about life before the camp?

HAMDIA AHMED: Nothing, because my mother had me while she was escaping the war, so I was literally a week or two weeks old when we arrived in Dadaab. Civil war broke out in Somalia in 1991. My mother first went to the refugee camp in 1992, and then she came back to Somalia because she thought the war and the conflicts were resolved. Then all of a sudden, it erupted even more. She was literally nine months pregnant with me and everyone was escaping, so she had to get all four of her kids and just find safety. They left everything behind — our house, our farm, our land — and started walking to Kenya, 370 miles away. In the middle of the journey, they took a break for a week, and that’s when she had me.

You were born en route to the refugee camp?

HAMDIA AHMED: Yes, she gave birth to me in the middle of Somalia, before you get to the Kenyan border. In the last town before you reach Kenya. They were just staying there to rest because they had been walking for such a long time.

Did she tell you what conditions were like where you were born?

HAMDIA AHMED: There was no hospital, no medication, nothing. It was like a plastic shelter. People were sleeping outside in little tents, just to rest.

How old were your brothers and sisters?

HAMDIA AHMED: Twelve, eleven, eight and three. So they were all babies.

How did she manage to take care of a newborn and four children on the journey?

HAMDIA AHMED: When I was born, my dad wasn’t with us. He had to stay behind to be with my grandmother. So my mom was really worried. Everyone was telling her, “You need to leave this girl. Abandon her, because she’s not going to survive. You just gave birth in the middle of all this conflict and you just need to run for your life. Take the other four kids with you. Leave this one behind.” But my mom said, “No, I’m going to keep all my five kids together.”

So they weren’t carrying a lot of supplies with them?

HAMDIA AHMED: No, my mom said when she started walking, she was carrying me, so my sister had to help her carry the jug of water, which is like the milk carton we have here, and like cookies and stuff. But other than that, you couldn’t cook real food. That was all they had.

What happened to your father and grandmother?

Do you remember UNICEF when you were growing up in the camp?

HAMDIA AHMED: I remember UNICEF workers would check our weight, and they would give us vaccinations. We also received high-nutrition porridge at school. Kids really loved getting that porridge at school. My brother was malnourished when he came to the camp. He was hospitalized for dehydration and UNICEF gave him oral rehydration solution and nutrition. UNICEF saved a lot of children’s lives.

How did your family get permission to resettle in the U.S.?

HAMDIA AHMED: U.N.H.C.R. (the UN Refugee Agency) does a whole process that you have to go through with the State Department to see if you qualify to come to the U.S. or Canada or Australia or England. My mom wanted to come to America, so she asked if she could be resettled here, and she had to wait. Then she was provided a refugee resettlement status to come here, along with a lot of other families. That was in 2005, when we moved to Atlanta, Georgia.

We almost didn’t make it to America, because the refugee card that was assigned to my family was sold to another family without our knowledge. Basically, identity theft. My mom went to the UN and said, “I can’t get food. They’re saying my card isn’t working. What is going on?” They had actually already canceled the card because the other family was going to America under our name. Then my mom gathered all of us and we went to the U.N. headquarters in Dadaab. My mom was crying outside. A guy came out and asked, “What’s the matter, ma’am? What can I do to help you?”

They put her card into the computer system and they said, “Oh my God. It’s identity theft. Your card… there’s a family traveling to the U.S. tonight with it.” So we wouldn’t even be here if that guy hadn’t helped us at the U.N. It happened to so many people.

Has the experience of being a refugee influenced your dreams for the future?

HAMDIA AHMED: I had big dreams when I lived in the refugee camp, but I didn’t know if they would come true. I didn’t know anywhere outside a refugee camp besides another town in Kenya. I always believed that more refugee camps existed around the world and it was a normal place for people to live.

When I was growing up in the camp, I always used to see the U.N. sign everywhere. I thought to myself, “I’m going to work for the U.N. one day and help other people living in refugee camps.” As a child, my education was important to me because I was excited to learn new things. I saw firsthand the work that UNICEF and other agencies did to help refugees and I admired their work. My dream has always been to work for a U.N. organization and to become an ambassador. I really want to give back to the organizations that helped me as a child, like UNICEF.

Also, ever since I was 10 years old, my dream has been to become a model one day. Growing up, I didn’t feel beautiful because I was bullied about my complexion. I also didn’t see a lot of women who looked like me in the fashion and beauty industry, and I’ve always wanted to change that. Everyone deserves to have someone to look up to. That’s why representation is so important. My dream is to get signed by a modeling agency. I want to go back to the refugee camp that I grew up in. I want to listen to the stories of people living in the camp and do whatever I can to create positive change in their lives.

As a former refugee, what do you think about the separation of children from their families at the borders of the U.S.?

HAMDIA AHMED: I’m just so saddened by the fact that kids have been taken away from their parents in the United States of America, where people go for a better life. No one ever leaves home unless home is unsafe. Children need to be with their families. They’re in hard times. I hope that no matter what people’s political views are, we can agree that this is unacceptable and come together and put an end to this and let those kids be reunited with their parents and loved ones.