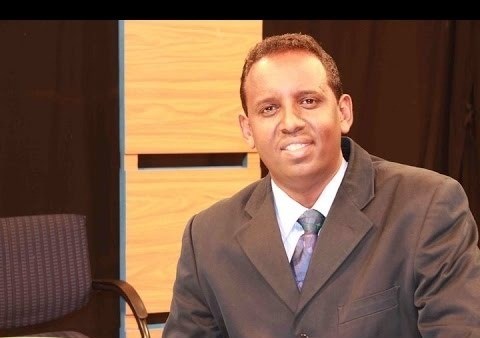 Late Awil Dahir Salad was among people who died in huge suicide attack targeted to a military checkpoint in the heart of Mogadishu near National Theatre .

Abdullahi Kulmiye Hersi a member of Universal management team told NUSOJ that journalist Awil Dahir ,the driver of Universal TV office Abdulkadir Hassan Arabey and two security guards confirmed dead in the huge blast and said , all them were riding on a vehicle passing near the checkpoint and were heading to Universal TV station not far from the scene of the explosion.

Awil Dahir was one of the most famous Somali journalists in the Somali speaking society and he was among many journalists who joined to Radio Mogadishu in the late 1980s.

After the collapse of Somalia’s central government Awil Dahir Salad had worked many different ,private media outlets including Hornafrik before joining to Universal TV. Awil was also a writer and composer of human stories .

Last years Awil was a presenter of the most popular TV show, “Dood Wadaag”at Universal TV . He was among few journalists who returned to Somalia to keep informed the public.

“On behalf of Somali Journalists, I send my deepest and heartfelt condolences to the families and friends of late Awil Dahir Salad and ask Allah to give him in hereafter life in paradise” Mohamed Ibrahim Moalimuu Secretary General of National Union of Somali Journalists said.

“The National Union of Somali Journalists (NUSOJ) shares this sad feeling and loss to all Somali Journalists and with the family’s members of late Awil Dahir Salad ” Farah Omar Nur Head of development and trainings of NUSOJ said.

I have known Awil since late 1980s when we had worked together at the State radio “Radio Mogadishu” and indeed he was a passionate and wonderful journalist , Farah Omar Nur added.

NUSOJ is participating the funeral arrangements with Universal TV colleagues in which many journalists in Mogadishu will attend.