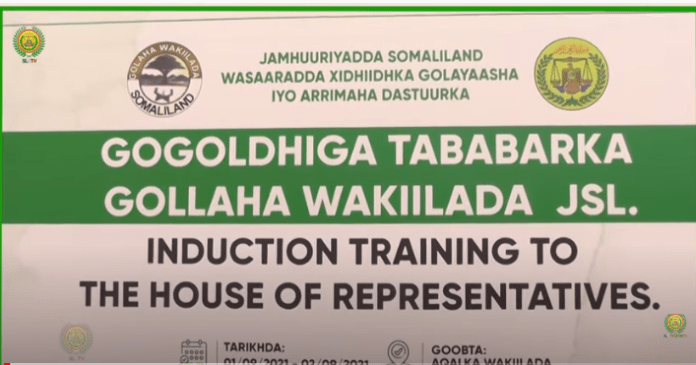 Newly elected Members of Somaliland’s Lower House of Parliament underwent a two-day induction program aimed at educating them on the national constitution and at the same time equipping MPs to better understand and effectively perform their role as legislators. Following the May 31st, 2021 parliament election, 99 percent of the members in the of 3rd Legislature of the Republic of Somaliland are newly elected MPs. The induction program is organized by the ministry of constitutional affairs which has close working relations with the parliament. Speaking at the opening ceremony, the constitutional affairs minister, Mohmed Adam Elmi, acknowledged the importance of training the MP’s on the constitutional. The new parliamentarians are expected to be equipped with the full knowledge of the country’s national constitution and skills that would help them to perform their legislative role in the parliament. The minister reiterated during the first day of the training that it is crucial for MP’s to benefit from the training and induction program. The new parliament will find the induction program useful for them, especially as a first time MP’s. It is expected that the new parliament will do all it can to consolidate and entrench the country democratic governance.