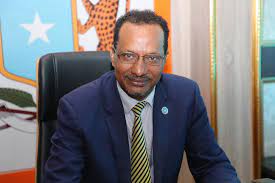 Somalia’s defense minister Hassan Husein Haji participated a meeting of African Union Peace and Security Council, with the focus on efforts aimed at ensuring that Somali troops assume the responsibility for security of Somalia prior to the exit of Amisom.

The meeting held virtually via Zoom saw the attendance of head of African Union Mission to Somalia Francisco Madeira.

Somalia’s defense minister discussed on the role that Somali gov’t troops could take against the fight of Al-Qaeda aligned militant group of Al Shabab and take over the responsibility of the security of Somalia before the exit of Amisom troops.