The Kingdom of New Atlantis (Wisdom Land) has its first official representative to the Republic of Somaliland on Friday. He is Mr. Abbas Ahmed Abbas.

Mr. Abbas is expected to arrive in the capital of Somaliland Hargeisa and will present copies of his credentials to Somaliland President H.E Musa Bihi Abdi in a meeting that will take place at the Presidency.

He is accredited as the official representative of the government and Kingdom of New Atlantis to the Republic of Somaliland.

This was disclosed in an official statement released by the Ministry of Foreign Affairs & Int’l Cooperation of the Kingdom of New Atlantis.

According to the statement, the new representative will give his best efforts towards the expansion and strengthening ties between Somaliland and the Kingdom of New Atlantis.

Kingdom’s PM and Minister of Foreign Affairs has expressed his full confidence that Abbas will be a faithful ambassador of the government and Kingdom of New Atlantis to Somaliland.

The Kingdom follows suit a number of foreign countries that have engaged diplomatically with the republic of Somaliland including the likes of UK, Ethiopia, Djibouti, Kenya, and Turkey which have official diplomatic presence in Somaliland capital Hargeisa. 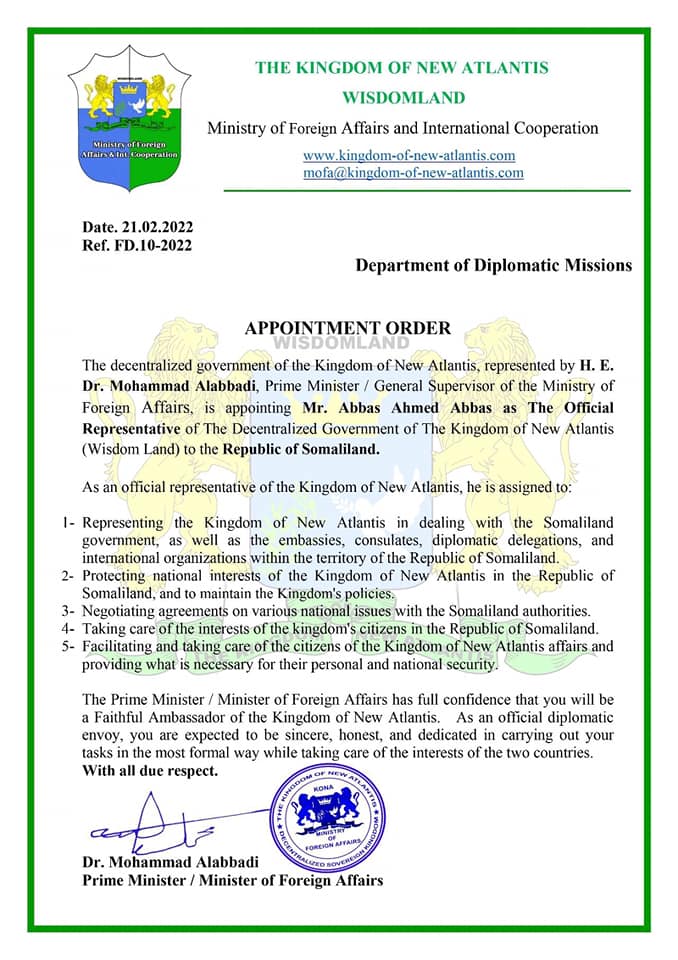