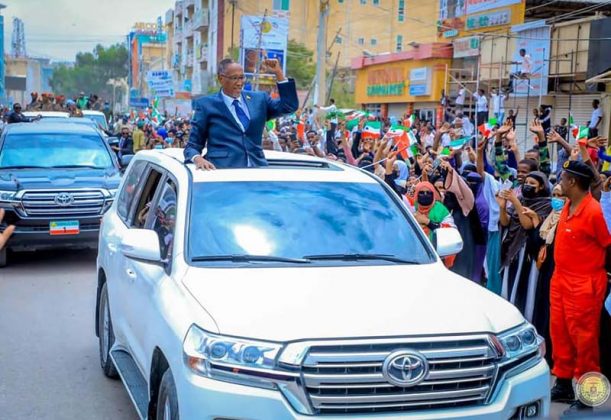 Thousands of people lined the streets of Somaliland capital Hargeisa on Saturday to welcome the President  of Somaliland Muse Bihi Abdi and his delegation after his first visit to the United States since he had assumed office in 2017.

Bihi returned to delirious crowds waving Somaliland flags in Hargeisa, weeks after departing on a trip to Washington where he had met US officials, including Assistant Secretary of State for African Affairs Molly Phee and members of the Congress.

US ambassador to Somalia Larry Andre said Bihi’s tour to Washington was at his initiative despite an assertion by Somaliland Minister of Information Saleban Ali Kore that the region’s leader had received an official invitation from the United States.

In a speech shortly after his return, Bihi said his visit was wrapped up successfully and that the United States attention was now being diverted to the self-proclaimed state after talks with top officials in Washington.

In a letter addressed to the Secretary of State Antony Blinken earlier this month, US House of Representatives Foreign Affairs committee called for an increased engagement with Somaliland on issues of mutual diplomatic, security and economic interests.