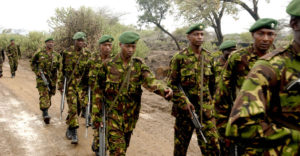 Five Kenyan soldiers were killed and 10 injured Wednesday when their vehicle hit a landmine on a road in a coastal area close to the Somali border.

“Soldiers operating in Lamu County, while on a humanitarian civil assignment to fetch and distribute water to the residents in the area, hit an Improvised Explosive Device [IED],” the military said in a statement on Wednesday, August 29.

It said five soldiers “succumbed to their injuries” while 10 were being treated for injuries.

The incident occurred on a dirt road a few kilometres from the border, between the coastal village of Kiunga, where there is an airstrip, and Sankuri.

The Kenyan army has for years been present in the area in a bid to disrupt attacks by al-Qaeda linked jihadists from the Shabaab group which is fighting to overthrow the internationally-backed government in Mogadishu.

Kenyan security officers are regularly killed by roadside bombs planted by the militants in the border areas, most recently earlier this month when five soldiers died in a roadside IED bombing claimed by al-Shabaab.

No one has claimed responsibility for Wednesday’s bomb.

Five paramilitary police officers were killed in June when their vehicle struck a roadside bomb in Liboi, close to the eastern border with Somalia.