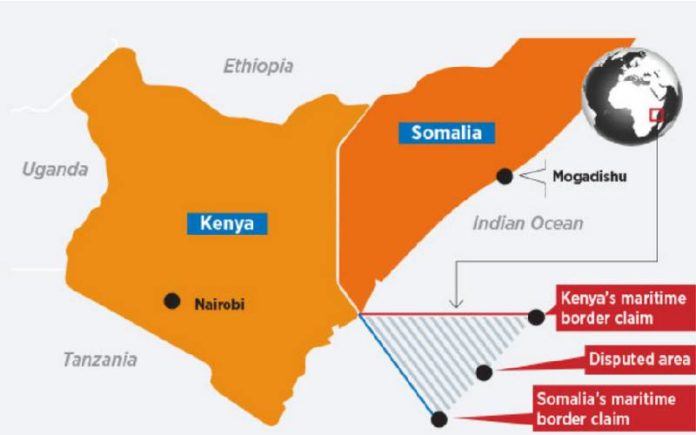 UN Secretary General António Guterres is said to have informally mentioned the raging dispute to the 15-member UNSC as a possible threat to peace and stability in the region.“Two weeks ago, the issue (maritime border dispute), was signaled by UN Secretary General to the Security Council as a potential threat to peace and regional security,” Foreign Affairs Cabinet Secretary Monica Juma said.Kenya argues should Somalia have its way, the issue will have ramifications across the continent, as this will prompt countries to the south also to negotiate their own borders.

This, Nairobi says, will affect Kenya against Tanzania, Tanzania against Mozambique and Mozambique against South Africa if the horizontal rule were to apply. Kenya fears should it cede ground or lose the case, it will lose 26 per cent of its Exclusive Economic Zone (EEZ) which is about 51,105 square kilometres and also 85 per cent or 95,320 square kilometers of the continental shelf beyond the 200 nautical miles EEZ and also access to international waters.“Kenya’s position on this matter of serous diplomatic interest and security concerns is unequivocal. Kenya will never cede and inch of her territory. Kenya understands her historical boundaries and believes Somalia understands that too,” Dr Juma says.

The UN was informed of the situation following escalating poor relations between Nairobi and Mogadishu sparked by Somali’s decision to offer for auction oil blocks within Kenya’s territory.Following the auction on February 7, during Somali Oil and Gas Conference in London, Kenya protested to the Federal Government of Somalia terming the move provocative act of aggression by a ‘thankless’ neighbour.

Nairobi also acted immediately by recalling its ambassador in Somalia Lieutenant-General (Rtd) Lucas Tumbo on  February 16 while ordering Somalia’s envoy out of Nairobi in protest.   In 2014, Somalia sued Kenya at the International Court of Justice asking for a proper determination of the sea border between the two countries. The ruling is expected in September this year.However, Kenya has not only rejected the jurisdiction of the ICJ, but also expressed fears the ruling may be influenced given the President of ICJ, Abdulqawi Ahmed Yusuf, is a Somali national.  “Kenya rejected the jurisdiction of the court and admissibility of the case on grounds parties had an MoU of 2009 agreeing on how to negotiate the dispute. However, the ICJ disregarded this argument and ruled the matter was within its jurisdiction and the case was admissible,” a note from Kenya’s Ministry of Foreign Affairs states.It adds; “Geopolitics of the composition of the court plays a key role in decisions of the ICJ, as they generally impact on how the judges vote in cases. Notably the President ICJ is Abdulqawi Ahmed Yusuf of Somali.”Although Kenya had demanded that Somalia withdraws the maps offered during the London auction, Mogadishu is said to have been reluctant inspite of assurances on the same.On April 3, Somalia’s foreign minister Ahmed Isse Awad met Juma and discussed the issue. However, Mogadishu is yet to return the minutes of the meeting to Nairobi after they were sent for confirmation and signing.