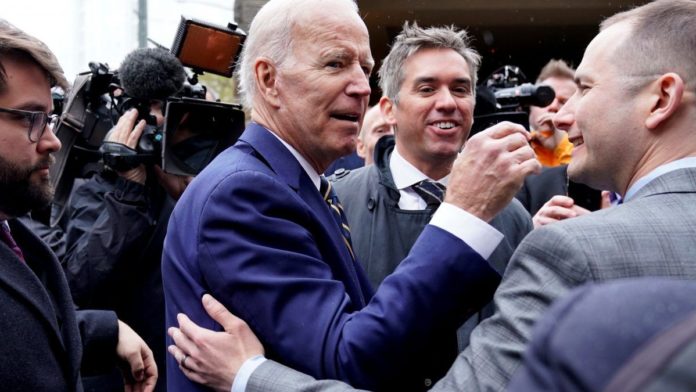 The former vice president has a long legacy of expanding federal power.

Joe Biden officially announced his presidential bid this morning, promising that he could save the country from Donald Trump and the forces of white supremacy.

“We are in a battle for the soul of this nation,” the former vice president says in a video released today, which focuses heavily on 2017’s deadly Unite the Right rally in Charlottesville, Virginia.

“If we give Donald Trump eight years in the White House, he will forever and fundamentally alter the character of this nation. Who we are. I cannot stand by and watch that happen,” says Biden.

Biden’s entry into the already crowded Democratic primary field is hardly a surprise. Now that he’s in, the former vice president has a lot of things going for him. First and foremost are his poll numbers. Biden consistently leads the pack nationally, and he’s doing very well in the early-voting states of New Hampshire and Iowa.

The latest University of New Hampshire poll has Biden as the second most preferred Democratic candidate in that state, garnering support from 18 percent of likely Democratic primary voters. That places him second only to progressive darling Bernie Sanders of neighboring Vermont (who sits at 30 percent). And Biden is cleaning up in Iowa, where the latest Monmouth University poll shows him winning support of 27 percent of likely caucusgoers. Sanders is pulling 16 percent in Iowa, while South Bend Mayor Peter Buttigieg is trailing in third place, with 9 percent.

That said, we’re a long way off from any actual voting. As Reason‘s resident poll expert, Stephanie Slade, likes to remind people, polls at this stage are hardly predictive.

Indeed, that aforementioned University of New Hampshire poll found that only 9 percent of respondents had “definitely decided” on a candidate, while another 14 percent were only “leaning toward someone.” A full 77 percent were “still trying to decide.”

In short, a lot can happen between now and the Democratic National Convention in July 2020.

The New York Times notes that Biden is entering the race with little money and no ready base of small dollar donors.

Then there’s his record. Biden has taken any number of stances that are anathema to today’s more progressive Democratic Party.

The former vice president is the only candidate in the race to have voted in favor of the Iraq war. When he was a senator from Delaware, Biden supported most every tough-on-crime policy you can imagine, from mandatory minimums to civil asset forfeiture to an expanded death penalty. He was one of the chief architects of the 1994 crime bill that helped usher in an era of mass incarceration.

He has so far declined to endorse several policies beloved by progressives, including Medicare for All and the Green New Deal. Such positions make Biden vulnerable to attack from other primary candidates running to his left.

That said, it’s fair to ask how much his less-than-progressive record will matter to most primary voters. Another Times article from early April found a wide gulf between the majority of Democratic voters and the party’s smaller progressive base. The former was much less active online—and much less concerned about the kind of social-justice issues that get a lot of attention on Twitter.

Biden’s announcement video from earlier today shows one way he might try to split the difference between these two camps, focusing like a laser on Trump and white supremacists while declining to mention many policy specifics.

Should he win the nomination, Biden would pull his party back from the left, but not necessarily bring it much closer to supporting individual liberty. He has little interest in running on a platform of expanded, budget-busting entitlements, but—his recent criticism of occupational licensing notwithstanding—he is in no way a small-government guy. His legacy is almost uniformly one of expanding the power of the federal government, whether to prosecute the drug war or go after sexual assault on campus.