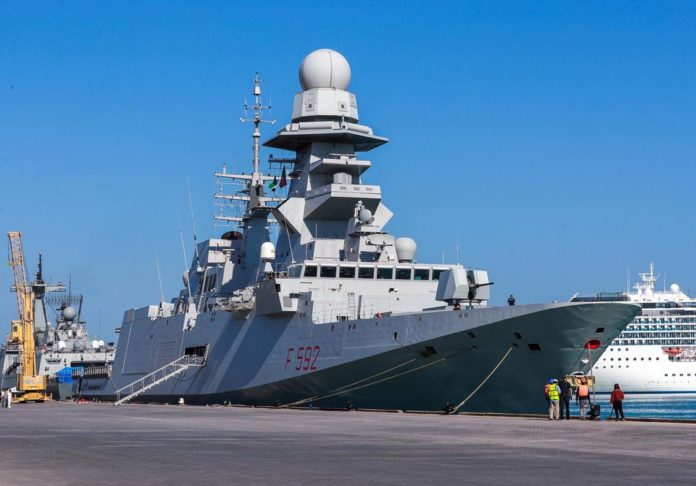 The scourge of sea piracy at the start of this decade led to the pillage, theft and hijacking of vessels worth hundreds of millions of dollars, and the kidnapping and ransom of sailors and crew.

Only a multinational fleet of navies deployed to the Horn of Africa in 2010 and 2011 put an end to the spree.

But hijackings are now on the rise again, and vessels like Italy’s Carlo Margottini are tasked with tackling armed pirates, often operating off the coast of Somalia.

On an exclusive tour of the advanced warship, its commander stressed the need to stay the course and protect the waters between Yemen, Djibouti, Eritrea and Somalia.

Commander Marco Guerriero, whose vessel is docked for the Abu Dhabi International Defence Exhibition (Idex), highlighted the ship’s technological sophistication over that of its adversaries.

On March 7, the frigate will depart Muscat to begin its second six-month tour of the Red Sea and Gulf of Aden, where pirates and smugglers have long operated with abandon.

“We contribute to creating a safe environment at sea, to providing freedom of navigation to all traffic,” said Commander Guerriero. That includes aid from the World Food Programme as well as the oil shipments that the Strait of Hormuz and the Suez Canal are synonymous with.

The ship is participating in Operation Atalanta, the European Union’s first naval operation, launched in 2008 to counter piracy at sea off the Horn of Africa and in the Indian Ocean. It will participate in the mission alongside vessels from Spain, France and elsewhere, to deter piracy and armed robbery.

Over the past decade, Operation Atalanta has carried out numerous successful anti-piracy missions, capturing dozens of pirates. As a result, much of the piracy, which reached a peak in waters around Somalia in 2011, was stamped out.

But in 2017, the number of incidents doubled in a single year, suggesting that plenty of work still needs to be done. A cargo ship from Dubai was hijacked off the coast of Somalia that year and its eight sailors were rescued days later.

Still, according to Mr Guerriero, the warship had a successful year in 2018. “So far I’d say that the activity of the unit was so effective that we did not need to go into a direct action with pirates”, he said.

“The pressure and the surveillance is good enough as a deterrent to prevent any contact.”

Built in 2014, the Carlo Margottini is state-of-the-art. Although it specialises in stealth and anti-submarine warfare, it is equipped for multiple types of mission. At 144 metres in length, it carries a crew of 167 and has a maximum speed of 27 knots. The frigate carries two helicopters and includes a surface anti-air missile system and two torpedo launch systems in its arsenal.

“This is a technological jewel, showcasing the best of Italian innovation,” said Liborio Stellino, Italy’s Ambassador to the UAE.

He was welcomed on board the frigate on Thursday, where he signed the welcome book and addressed the ship’s crew, comprised of sailors, pilots and special forces.

The frigate’s arrival in the UAE and six-month deployed is significant.

Emirati companies DP World and P&O operate ports in Bosaso, Somalia, and Berbera in Somaliland, and have two military bases in the Horn of Africa. The UAE is therefore keen to protect shipping routes and has funded anti-piracy operations in Somalia.

“This is a very important area for all maritime traffic,” said Mr Guerriero. “Italy is one of the countries that has been taking part in this operation since the beginning.”

Mr Stellino referred to the historic military co-operation between Italy and the UAE in Kosovo and Afghanistan. Anti-piracy operations in the waters around the Horn of Africa, presenting a global threat, are no different, he said.

“This is like a floating embassy,” Mr Stellino said. “It is a demonstration of Italian hard and soft power.”

The Idex Conference runs from February 17 to 21 and will host the world’s biggest arms manufacturers. The event, which will comprise representatives from the US, Germany, Saudi Arabia, Italy and France — as well as the UAE — is expected to see deals exceeding Dh19.17 billion signed.

For Italy it is an opportunity to present the best weaponry and material the country’s large defence sector has to offer. It is against this backdrop that the Carlo Margottini has docked in the UAE.

“Hopefully it will allow people to discover the parts of Italy that are not food, fashion and Ferraris,” said Mr Stellino.