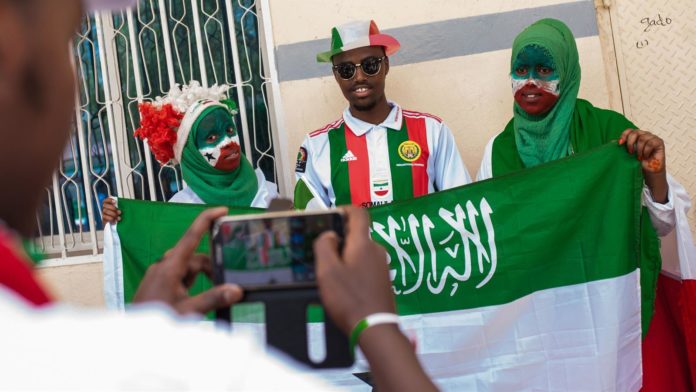 Because a failure to grant statehood could reignite a war

The self-declared state of Somaliland is stepping up its push for international recognition, warning that the world’s continued refusal to formally accept its independence threatens to plunge the breakaway region back into armed conflict with Somalia.

“We have made a lot of progress in the past 27 years and now we are recognized as a de facto state,” Saad Ali Shire, minister of foreign affairs, said in an interview in the capital, Hargeisa. “[But] the next 27 years is not going to be like the first,” he said. “War is bound to happen unless the problem is settled peacefully one way or another.”

This year Somaliland’s army has already clashed with troops from the northern Somali region of Puntland in an escalation of a long-running standoff over contested territory. So long as Somaliland’s statehood and national boundaries are not formerly recognized, the risk of renewed conflict will increase, Saad said.

SOMALILAND HAS DIPLOMATIC REPRESENTATION IN DOZENS OF COUNTRIES AROUND THE WORLD, INCLUDING THE U.K.

The former British protectorate of Somaliland united with Italian Somalia in 1960 following independence and then broke away in 1991, when clan militias overthrew Somali dictator Siad Barre’s government.

Ever since, as Somalia collapsed into three decades of civil war marked by corruption, violence and religious extremism, Somaliland has delivered relative peace and stability to its 3.5 million people, establishing its own Parliament and holding four national elections since 2003.

The breakaway state issues its own passports, prints its own currency and has begun to attract foreign investment. Dubai-based DP World is embarking on a multimillion-dollar port expansion, while London-listed Genel Energy plans to drill for oil.

The vote of confidence from international business will help Somaliland intensify its diplomatic efforts to win recognition, Saad said. “It is clear we are a responsible international player. The international community has no valid reason [not to recognize our independence],” he said.

In a diplomatic coup for the country, Somaliland signed a deal with Ethiopia this year to invest in its port alongside DP World. Last month Harriett Baldwin, U.K. minister of state for Africa, visited the country.

Somaliland has diplomatic representation in dozens of countries around the world, including the U.K., and international engagement between Britain and Somaliland is frequent. The U.K.’s Department for International Development spent 25 million pounds between December 2012 and September 2018 on a national development fund to improve governance, accountability and public service delivery in the self-declared state, but like the rest of the world, it does not officially recognize the country.

The biggest obstacle to recognition remains Somalia, which is mired in conflict and refuses to endorse the breakaway region. Countries that have achieved independence in recent times, such as South Sudan, Eritrea and East Timor, have had the ultimate approval of their former parent state.

“We believe that it is for the Federal Government of Somalia and Somaliland to reach agreement on their future together and that it is for those in the region to take the lead in recognizing the resulting agreement,” a U.K. Foreign Office spokeswoman told the Financial Times in response to questions.

That message is consistent across Western governments, says Ahmed Soliman, a Horn of Africa expert at Chatham House in London. “Until there are formal discussions between Mogadishu and Hargeisa, endorsed by the African Union or other regional players, it is unlikely that any country would take the final step [of recognizing Somaliland],” Soliman says.

Officially talks are ongoing, but relations remain difficult. A planned first meeting between Muse Bihi Abdi, Somaliland’s president, and his Somali counterpart Mohamed Abdullahi Farmaajo was shelved earlier this year as tensions flared over DP World’s investment in the Somaliland port of Berbera, which Farmaajo opposed.

Hassan Sheikh Mohamud, Somalia’s president until last year, said relations between the two governments had improved since 2012 but that Somalia’s objective of restoring the country’s historic borders and reintegrating Somaliland was unchanged. “Unity is in the interests of south, of north, of every Somali,” Hassan said last month.

Edna Adan, who served as Somaliland foreign minister from 2003 to 2006 and was previously married to Mohamed Haji Ibrahim Egal, Somalia’s first prime minister, sees the stalemate as frustrating and dangerous.

“What is painful is that the world knows that Somaliland is different from Somalia, always has been, always will be, and that it refuses to recognize that difference,” she said in an interview in Hargeisa.

Any attempt to reunify Somaliland and Somalia would lead directly to conflict and give further fuel to the violent Islamist groups and piracy that have undermined security onshore and offshore in Somalia for the past decade, she said.