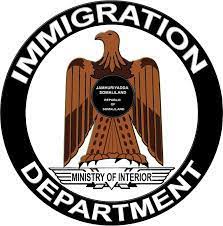 Somaliland has given an ultimatum to illegal foreigners to leave its territory, within twenty days.

The Somaliland Immigration Department released a statement citing that starting from 28/07/2022 to 17/08/2022,  illegal foreigners in Somaliland must leave.

“The Immigration Command of the Republic of Somaliland informs foreigners who are illegally staying in Somaliland to leave for a period of twenty (20) days starting from 28/07/2022 to 17/08/2022” said the order of the immigration branch.

Also, businessmen and other people who employ foreign workers, have been warned against employing illegals in their establishments.

“Also, companies, agencies and businesses that employ foreign workers are being informed that they should only employ foreigners who have a valid visa or refugee status,” said the order of the immigration department.

It is not clear who the said illegal foreigners currently working or residing in Somaliland are, as there are both internally displaced Somalis from Southern Somalia and from Ethiopia are living here.

This is not the first time that Somaliland expelled Somali and Ethiopian refugees who sought peace and work in the peaceful self declared independent region.