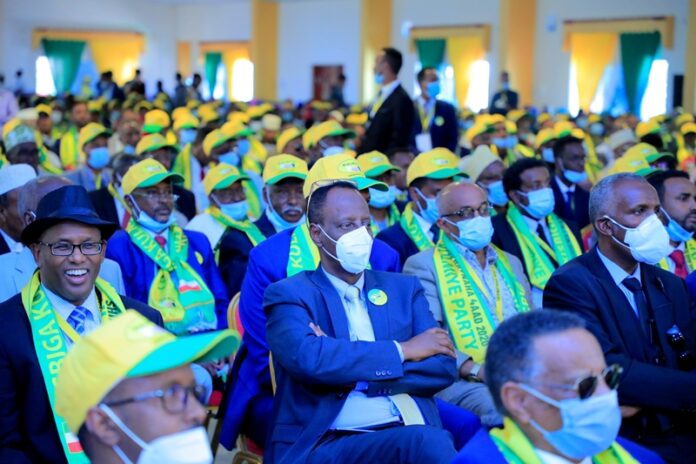 Ruling party Kulmiye of Somaliland has officially opened its 4th General Assembly while the party members will elect top brass leadership including the flag-bearer who will stand for the upcoming presidential polls.

Around thousand and two hundred delegates drawn from different provinces of the country are attending the GA.

International dignitaries attending GA include the Taiwan represent to Somaliland, the minister of Somali state in Ethiopia.

Kulmiye party is gearing up for the next general election in the country.

They want to decide who will run for them in the upcoming presidential elections of SL.

The leader they would choose is the key to the success in the long term future polls but this year is different from the past. There are no opposing candidates competing with each other in the race.

The incumbent Somaliland president Musa Bihi Abdi is seeking his second term of re-election and is the most likely to be the party nominee.

In his remarks, the president stressed Kulmiye’s achievement since it came to power.

Bihi said: “We have introduced pension bill to the parliament. We should first get the idea and the law to solve problem. You should face and identify the problem and then try to solve it. This led us to introduce this new bill concerning the pension which we expect to start pensioning in next year so as the youth get a chance for job opportunity the country.”

The president said his government implemented good diplomatic relations with regional countries. He also said that Somaliland will play an important role in the regional stability.

He said: ” This govt has implemented stable and foreign policy that serves the good at the dignity of Somaliland as well as having good diplomatic relations with regional countries.”

Musa Bihi has also hailed the decision made by his deputy to quit the race from the party leadership in 2020.

Former ministers who were aspiring to join the race of the ruling party top leadership were boycotted after they accused of being held captive by the president.

Kulmiye was founded in 2002 and has been the ruling party for the last decade since it came to power in 2010.