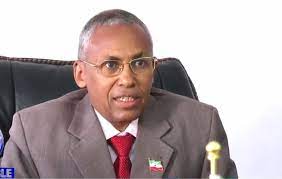 Minister for Finance, Dr. Saad Ali Shire, who has himself admitted on Thursday at the Ministerial Council meeting that life was becoming harder and more difficult for low-income families with prices of oil and essential food items soaring, detailed steps the government is taking to ease the burden.

The Minister of Finance of Somaliland, Dr. Saad Ali Shire, gave an in-depth speech on the current economic situation in Somalia and the world, the recent rise in inflation, the steps taken, and the government’s plans.

The causes of inflation, the minister also explained, pointed out that most of the inflation in Somaliland is from the outside world, due to the Covid-19 disease in the world and the ongoing war between Russia and Ukraine, which resulted in many countries around the world, to have banned food exports.

The steps the government has taken to ease the burden among others include tax exemption of four basic food items sugar, rice, flour, and oil, while the government injected 4 billion Somaliland shilling into the agricultural sector.

Since the breakout of the Russian offensive against Ukraine, commodity prices in markets in the Republic of Somaliland and across the region appear to have taken unfair advantage of professed shortages raising prices from one day to the next on an unbroken upward-surging graph.