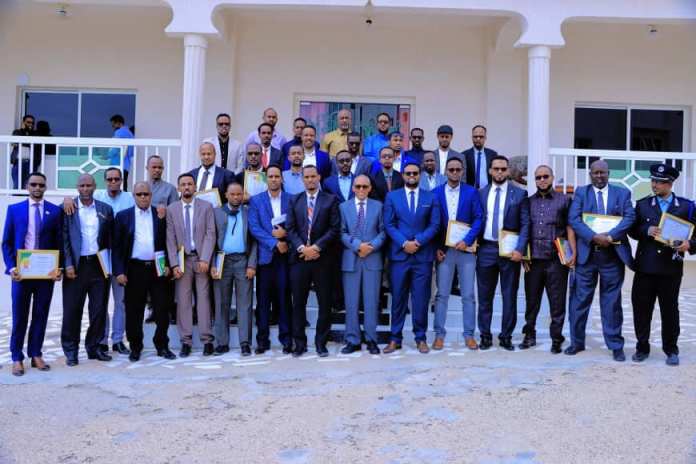 The Minister of Finance Dr. Sa’ad Ali Shire has advised the staff and officials that their overall goal is to increase the national revenue, while speaking at the end of a workshop to evaluate the performance of the revenue departments of the Inland and customs, in the first phase of the first six months of this year, Jan to June 2021, all the managers of the regional and district revenue offices were heard. The evaluation workshop which took place over the last two days at the Ambassador Hotel in Hargeisa, has revealed revenue upsurge of an average of 1% upsurge on projected revenue estimates. Commander of the Tax Protection Force Lieutenant Colonel Osman applauded the close cooperation between the departments of Revenue of the Ministry of Finance and promised his force to work collecting projected revenue and more. Director General of the Ministry of Finance Mohamed Abdi Gurhan said in a speech that the overall goal of the Ministry of Finance is to improve the financial management system, which is to collect the maximum amount of revenue allowed by law. “We have to collect the maximum income allowed by law.” Deputy Minister of Finance, Mr. Muse Ibrahim Selef, speaking at the meeting praised the revenue department’s staff performance and underlined that the increase of revenue reflects they are doing their duties in good faith and urged them to redouble their efforts. “The increase in revenue reflects the efforts you are making,” he said. Speaking at the end of the meeting, the Minister of Finance, Dr. Saad Ali Shire, acknowledged all the staff and Finance Officials for their dedicated work in increasing national revenue. “Our overall goal is always to increase Somaliland’s national revenue.” At the event, certificates of honor and other awards were presented to the officials who reached the revenue target set for the six-month period. Senior officials of the Ministry also commended the officials and staff of the Revenue Departments for their efforts and competences. The Ministry of Finance with the grace of God and the efforts of its leaders and staff, managed to ensure that there has been no decrease in the Government’s budget in recent years, while there were financial burdens due to on COVID syndrome, similar to the rest of the world, with no new currency issued by the government since 2016, which also increased the value of the Somaliland Shilling and maintained at a reasonable and reliable rate. At the end Ministry of Finance leaders and the Managers of the Customs and Inland offices of the Regions and Districts of the country have collectively agreed to work reaching projected revenue targets, and what is on their side efforts to implement the Financial Management Reform Program,  such as: Upgrading the country’s tax administration, simplifying the online taxpayer portal system, implementing the IFMIS Automate system for financial management data, and accelerating the process of issuing tax identification number, Tax Identification -forming and strengthening the staff of the Ministry.