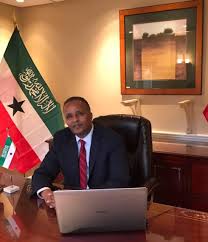 Press statement
Somalia will conduct something they will call elections within the next 12 months. Once again they will poach our youth and elders and will call them Somaliland representatives. Now is the time to do something about it.
My recommendation is the following;
1- Somaliland parliament shall pass a legislation that will explicitly prohibit becoming a member of (employed by) Somalia government as FGS member, Parliament member, or Guurti member.
2- The legislation shall spell out the punishment for violating this law.
3- The legislation shall also direct the government to defend the sovereignty of the nation by retaliate against Somalia, if and when this happens.
4- The legislation shall also prohibit anyone for seeking or accepting employment from any organization based in Somalia including the international Organizations like the UN, EU, and Others.
5- The legislation shall also direct the government to apprehend and bring to justice to Somalia officials / leaders who have committed crimes against the people of Somaliland.
This will allow the Somaliland government to act lawfully against anyone who violates this law. This will also authorize the government to to defend the nation lawfully. If Somaliland parliament does not pass this law now, we will be complaining later and the government will be powerless to act, and even if it acts that will become an action that will further divide the Somaliland people in the absence of clear and explicit legal authority. Now is the time to design and strategy to prevent this issue for becoming a challenge to our nation in the future (really in 12 months).