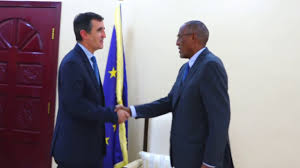 delegation from the European Union (EU) arrives in Hargeisa yesterday to mediate between the two main opposition parties in Somaliland and the government which are locked horns over the selection process of the upcoming Electoral Commission.

The High level delegation from the EU in Somaliland is headed by its envoy to Somalia, Mr. Nicolas Berlanga and will hold separate meetings with the government led by president Musa Bihi and the two main opposition parties namely, Wadani and UCID.

UCID and Wadani parties had withdrawn their members that they selected to represent them at upcoming NEC.

The two parties expressed concern over the appointment of two members to the election commission by the incumbent Somaliland leader.

Mr. Abdirashid Mohamud Ali alias Riyo-raac is selected by the president but the the opposition parties had snubbed him to be added to the new commission citing that he is staunch member of Kulmiye-Somaliland’s ruling party.

The opposition parties opposed against Ms. Kaltun Sheikh Hassan, who was a member of the election commission which its term expired but the president appointed her to serve once again as new NEC member.

The EU’s mediation brokered a deal among the three national political parties which disputed over electoral commission members.

Wadani party withdrew the national electoral commission from its confidence.

It seems that once the argument arose that the election preparation which the government in conjunction with the three political parties worked together has now hit a bottleneck.

Wadani chair, Abdirahman Irro, sent a plea to the international over the gripe against the addition of two members into the upcoming commission by the president.

Mr. Irro asked for a mediation according to the letter addressed to the international community.