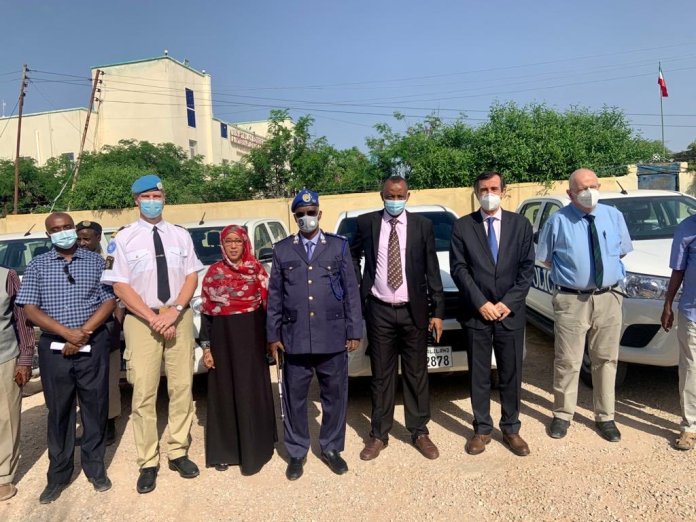 Logistics for the provision of apt Rule of law and order in Somaliland have benefited from an EU and partners largesse.

This follows the donation of a fleet of thirteen vehicles by the  European Union, Sweden and the UN Joint Rule of Law team.

According to a statement released by the EU “Eight of the cars will be used in new police stations being constructed this year with support from UNDP.

The remaining cars will be used by justice officials to facilitate monitoring visits to regional courts and dedicated Women and Children Units where female prosecutors assist those reporting abuse. In the short term, the cars will also be used by election security risk assessment teams to meet with police officers and local communities in six regions and to monitor local election preparations and voting.

“The European Union is strongly committed to supporting democracy in Somaliland. These vehicles will play a crucial role in monitoring elections preparation and ensuring election security,” said Nicolas Berlanga Martinez, EU Ambassador. “After the elections, the vehicles will be used by rule of law institutions where they will help enhance community policing and access to justice for the most vulnerable members of the community such as children, IDPs, and those affected gender-based violence.”

“I would like to express our thanks to the EU and Sweden and to UNDP, UNSOM and the other agencies involved in the Joint Rule of Law Programme in Somaliland for helping us make Somaliland safer and more secure,” said Naasir Aydid Mohamed, Vice Minister of Interior.

“We are delighted to be part of an initiative that will help justice officials monitor services across Somaliland to ensure that citizens can enjoy fair and open courts, efficient policing and access to justice no matter where they live,” said Samira Hassan Ahmed, UNDP’s Head of Area Office. “This complements our work over many years in Somaliland to help develop community policing and legal aid as well as counselling and other services for victims of domestic violence.”

“The provision of these vehicles is part of the UN’s broader support to Somaliland in its efforts to achieve the Sustainable Development Goals,” said Simon Strachan, UNSOM’s Head of Office. “Other Joint Rule of Law Programme activities include legal aid for women and vulnerable groups, such as children, minorities and refugees/IDPs; the monitoring of prisons and police stations to ensure compliance with human rights standards; and capacity building for all justice institutions, including training and equipment.