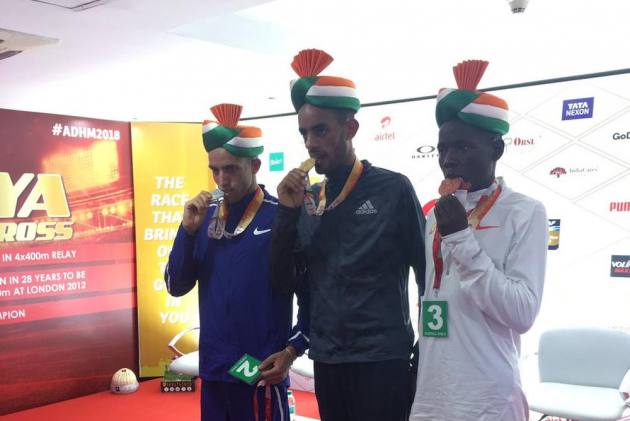 Ethiopians dominated Delhi Half Marathon 2018 with Tsehay Gemechu setting a course record and Andamalak Belihu winning the men’s elite field in Delhi on Sunday. It was a first-time victory at the course for both the winners.

Zeineba Yimer of Ethiopia grabbed the last spot on the podium with a time of 1:06:59.

Along with the winner’s cheque of USD 27,000, Gemechu will take home an additional USD 10,000 for setting a new course record.

Tirunesh Dibaba, the greatest ever woman distance runner in the world with three Olympic, five World Championship gold medals in 5000m and 10,000m, had a forgettable race as fatigue caught up with her as she strayed from the pack from the beginning.

Belihu, who finished second last year, improved on his personal best clocking 59:18 seconds. However, he was unable to break the course record which still stands in the name of Ethiopia’s Guye Adola, set in 2014.

Walelegn clinched the silver ending the race with a time of 59:22 seconds. While Kenya’s Daniel Kipchumba grabbed the third spot clocking 59:48 seconds.

Among the Indians, Abhishek Pal won the the men’s race clocking 1:4:14 seconds. Avinash Sable grabbed the silver with a timing of 1:04:14, while Asian marathon champion Gopi T claimed the third spot on the podium finishing at 1:04:15.

Youngster Sanjivani Jadhav was the best Indian in the women’s elite field finishing with a time of 1:13:58. Parul Chaudhary and Monika Athare finished second and third respectively.