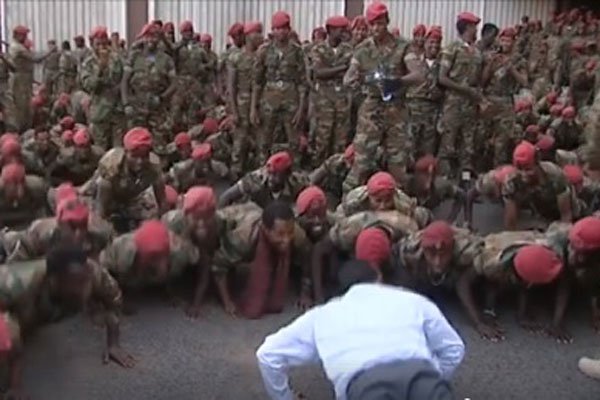 Ethiopia’s Prime Minister Abiy Ahmed has said that some of the soldiers who entered the grounds of his office last week had wanted to kill him.

At the time, he defused the situation by ordering them to do press-ups and joining in.

Mr Abiy and the soldiers were seen laughing but he told parliament that “inside I was very unhappy”.

Over the past six months, he has made some major reforms and he said some of the troops wanted to derail them.

“The march of some members of the army to the National Palace [the prime minister’s office] was not only unlawful but very dangerous, because the intention was to abort the ongoing reforms,” Mr Abiy told MPs during a question-and-answer session.

“Meanwhile, after the situation was brought under control, some forces were heard saying: ‘He escaped before we could kill him.'”

Many have been surprised by the fact that the prime minister’s comments this week are quite different to how he responded last week to the incident.

Then he was seen laughing and smiling, but he has revealed in parliament that he was “angry and frustrated”.

He said he feared that a conflict would break out as “young people… were marching towards [Addis Ababa] to engage in war”.

On the other hand, there is an awareness that there are some who not happy with his reforms.

The prime minister has in the past mentioned “forces” who do not agree with the changes that he is making.

He used this term when talking about another alleged attempt on his life and also when describing outbreaks of ethnic violence in different parts of the country.

On 10 October, several hundred protesting soldiers, some of them armed, went to see the prime minister – reportedly to demand a pay rise.

Speaking to MPs on Thursday, Mr Abiy said that without the order to do the press-ups, “the whole issue would have escalated… Some people see the push-ups we did as very casual. But, we used it to pacify the situation.

“In the military, push-ups or doing some kind of exercise or talking loudly are some of the measures used to relieve grievances or emotions.”

Since coming to power in April, Mr Abiy has made some dramatic changes – including freeing thousands of political prisoners, unbanning some outlawed groups and making peace with long-time foe Eritrea.

Last month, Ethiopian prosecutors charged five suspects with terrorism over an attempt to kill Mr Abiy in a grenade attack at a rally in June.

He escaped uninjured and described the attack at the time as an “unsuccessful attempt by forces who do not want to see Ethiopia united”.​