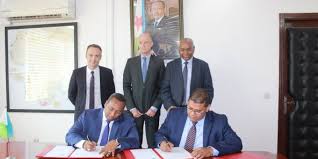 The project, which will be the first large-scale solar power plant in the country, will be “followed by other projects in the field of energy such as rural electrification,” said HE Minister Yonis Ali Guedi in a press release.

According to the 2016-2020 Country Strategy Paper on Djibouti, published by the African Development Bank Group, the country faces problems such as inadequate distribution networks, and electricity prices are quite high. Approximately 80% of the nation’s energy comes from neighboring Ethiopia.

In a country where climatic conditions can be extreme — drought, floods and earthquakes are common — the government is aiming to achieve complete energy independence by setting a goal of 100% renewable energy production by 2020. But so far,  Djibouti has yet to deploy any solar capacity, according to the latest statistics from the International Renewable Energy Agency (IRENA).

The country’s current installed generating capacity stands at just 126 MW, all of which comes from thermal power facilities. According to the United States Agency for International Development (USAID), Djibouti has the potential to generate more than 300 MW of electric power from renewable energy sources.

Through a subsidiary, Engie has around 3.15 GW of renewable energy capacity across the African continent, including commissioned projects and those still under development.