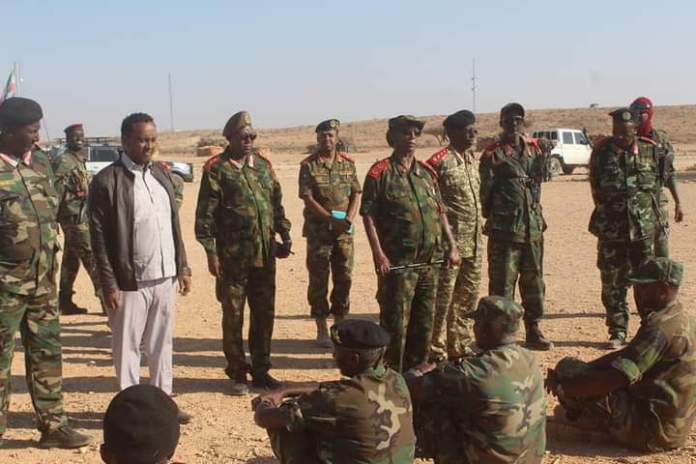 The Minister of Defense and the Commander of the Armed Forces of the Republic of Somaliland concluded their inspection visit to army barracks in Sool Region reassured the public that the troops were safe and ready to carry out their duties.

The Minister of Defense Hon. Abdiqani M. Aateye, accompanied by the Commander of the National Army Major General Nuh Ismail Taani, and the Commander of the Eastern Division, Brigadier General Ali Barre Hussein, elaborated on the importance of the recent visit to the bases of the National Army and the message they will convey to the President of the Republic of Somaliland and the people of Somaliland.

Major General Nuh underlined that he had confidence in the National Army, as witnessed by people living around their garrison’s settlements.

Commander Noah described as unpleasant the exaggeration of small issues while acknowledging that human was to error as only Allah never goes wrong. Army Commander Nuh stated every official has responsibilities to be held accountable here or in the life after, and require to perform their tasks diligently.

“Political parties are going to the polls. They are our people. We (the army) are neutral. Every soldier can vote for the party of his choice, but the army should not be mingled in politics. Our duty is to prevail upon anyone who violates the nation security,” he said.

The Minister of Defense Hon. Abdiqani M. Aateye, addressing the venue elaborated their purpose of their inspection was to provide their information to the President H.E. Bihi and to the public at large.

“It cannot be said that the national army has not fulfilled its duty. In fact, it has fulfilled 100%. I say let’s defend our army, our country and our people and work together against any kind of enemy. The National Army is safe and greeting their fellow Somaliland community”.

Recently wayward distracters peddled lies about a military base claiming falsefully that they were jittery.