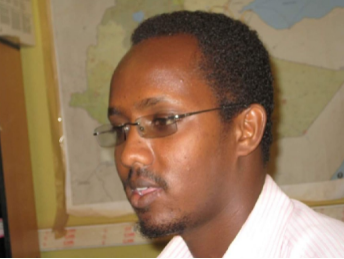 I and Mohamed met at the Ethiopian Civil Service College (ECSC) in 2003, But now called Ethiopia Civil Service University (ECSU). The ECSU was formally established in February 1996 as an autonomous institution with a legal status by the Council of Minister Regulation No.3/1996 with a key purpose of capacity building in the public sector. The ECSU had two campuses located at CMC Road and Kotebe Road. We Both were studying Economics at Kotebe Campus, and we were in same class until our graduation in August 2006.

In addition, I and Mohamed M. Gure were living in the same dorm for two years specifically, 2005 and 2006.

Mohamed always has a smiling face and was a full of jokes. He used to make a fun of the others, even if all the other roomies together try to make him anger. No matter how hard they try, they (roommates) never succeed.

Mohamed was the youngest in our dorm, & in our economics department at the time. Most of the students who were studying at the ECSU were public servants prior to joining the University. The students had other qualifications from other Colleges/ Institutions. For example, I had a diploma in General Agriculture from Ambo College of Agriculture (ACA) and was working at the SRS-Cooperative Promotion Bureau as an expert.

However, Mohamed did not have another credential. He was direct from his high school. Nevertheless, Mohamed was a very ambitious young man, with dedication and determination.

Roomies chat & joke in team at their free times in their dorm. Most of time, after lunch or after library, we used to touch different issues including our favorites things.

This literally means, Mohamed jokingly used to say frequently, pray for me for the position of regional water bureau, that office can quench my thirst…”

Mohamed is a man of Somali culture and literature. At young age, he used to try to recite Somali poems. He had a notebook with full of poems of his and well-known poets.

After graduation, Mohamed started his first job at the Somali Region Pastoral & Agro-Pastoral Research Institute (SORPARI) at the capacity of Planning, Monitoring, and Programme Head. He worked in this institute between 2007-2009. Then, joined World Food Program (WFP) as Monitoring & Evaluation Officer based in Gode, Shabelle Zone. Mr. Mohamed worked for WFP from 2009 to 2017. During his stay with WFP, Mohamed was loved by his colleagues, and supervisors.

Mr Mohamed, overall worked in Food Security & Livelihood Improvement sector for more than a decade, by serving the most needy and vulnerable sisters and brothers in the region. Mr Mohamed, while working in this sector, He was able to make many friends and established networks at varying levels from village to National level.

In addition, to his BA in Economics. Mr Mohamed got his 2nd degree from Jigjiga University in 2018 in the field of Pastoral Economic and Development (PED).

In January 2018, a big change happened in Ethiopia. Dr Abiye Ahmed became the Prime Minister of Ethiopia. First time from a person from Oromia region, which is the most populous & the largest region in Ethiopia, politics has tip towards the south.

Then, Dr Abiye Ahmed changed most of the regional presidents including Abdi Iley. The cruelest regional president ever seen in Ethiopia. Following the overthrowal of Abdi Iley, Deputy President Mustafa M Omer has come to the position.

DP Mustafa M Omer invited Somali intellectuals, who were clean from the previous regional governments, and were working for both government and humanitarian organizations in the country and the neighboring countries like Somalia, Kenya, Djibouti etc. to come and serve their people.

Mr. Mohamed was among the regional intellectuals, who got the opportunity to serve their people at capacity of deputy head at Regional Public Civil Service and Human Resource Development Bureau. Mohamed and his head Mr Abdulkadir Rashid have done a tremendous job in their bureau.

They (Mohamed & Abdulkadir) in accordance with Ethiopian civil service proclamation and regional directives have selected and recruited thousands and thousands of young new Somali graduates and unemployed earlier years’ graduates, who did not get the opportunities. because of favoritism and widespread corruption related practices.

The regional ruling party (aka Prosperity Party-Somali branch) awarded both official to represent the party on June 5, 2021 election as candidates at Jarar Zone, and Liban Zone at different levels. For Mohamed to compete for a federal seat, while Mr Abdulkadir for a regional seat, respectively.

The reason behind this article is that I have seen numerous arguments associated with his eligibility to represent the Jarar Zone. I do not want to go in depth to unending Somali zonal power-sharing issue that goes like peeling the onion. But I want to remind my fellow citizens that Somali tribes in Somali Region is approximately 35 to 37 tribes. We have 24 Federal seats, including the one from Dire Dawa City Administration.

In our region, there is no a single tribe/Sub-clan that can elect one Federal Member of Parliament exclusively by themselves. Let me take the two most respected Somali-Prosperity Party Federal MP candidates: Dr Abdi Wasac Bade and Haji Abdikarim Akip.

Hence, any political Party or independent candidates that want to win these seats, should first think outside the box and should come up with a comprehensive political program that can get buyers beyond his/her village.  In addition, s/he needs alliance and huge financial support to achieve his political dreams.

I strongly believe that, even if, there are challenges or obstacles as a huge as a Karamardha Mountain is presented before him (Mohamed). Based on his networks and communication skills, I have a full confidence on him that he will overcome all hurdles he encounters in his way to the Federal Member of Parliament (MP).