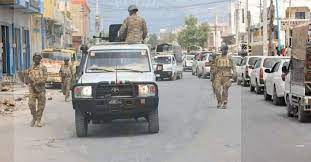 A ceasefire between troops loyal to Puntland regional leader Saed Deni and US-trained elite counter terrorism forces held into the first day on Friday in Bosaso, days after the commercial port city had seen the worst outbreak of fighting in more than a decade.

Authorities and Puntland Security Forces (PSF) traded accusations on Thursday, blaming each other for breaking the ceasefire agreed on Wednesday after the fighting erupted overnight, in what residences said was most vicious clashes in the three-day gun battle.

Residents have begun returning to their homes after fleeing to areas outside the city and businesses have normally resumed as the city seems reeling from the last hostilities.

Regional elders and politicians have engaged in efforts to mediate to the tension that had triggered by regional leader’s sacking of PSF commander, who defied orders to hand over responsibilities.

The fighting claimed the death of more than 20 people and 70 others wounded. Among them were 5 members of a single whose home had been hit by a mortar shell.