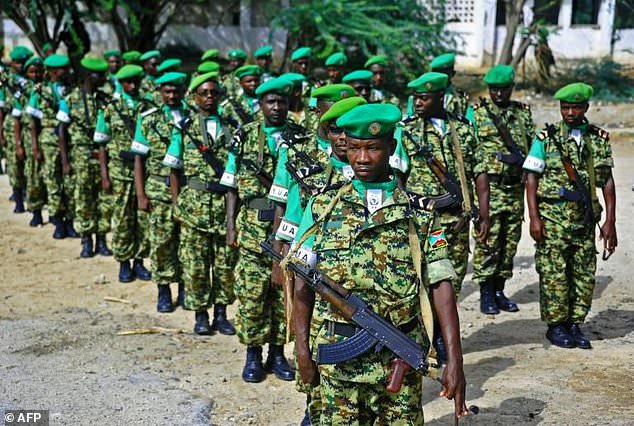 The African Union has asked Burundi to reduce its contribution to an African peacekeeping force in Somalia by a thousand men under a progressive pullout from the country by the AU.

The AU made the request through a diplomatic document called a note verbale, requesting that the reduction be completed by February 28.

The AU has a 21,500-strong force, Amisom, to support Somalia’s fragile internationally-backed government and fight Shabaab jihadists blamed for scores of bloody attacks.

The force is to be gradually scaled back as Somalia’s embryonic armed forces are trained up and deployed to replace them.

The note verbale, seen by AFP Friday, summarises the conclusions of a November 30 meeting of Amisom’s military operations coordination committee in the Ethiopian capital Addis Ababa.

“It has been decided that the Burundi National Defence Force should reduce (its contingent by) 1,000 troops by February 28,” the document says, quoting a United Nations Security Council resolution seeking UN funds to help Amisom’s pullout.

Somalia has the second-largest contingent in Amisom with 5,400 troops, after Uganda, which has 6,200 men. Other contributors are Djibouti, Ethiopia and Kenya.

The note verbale takes place against a background of recent tension between Burundi and the AU.

The AU has called on Burundi — strongly criticised abroad for its record on human rights — to ease its hardline stance on dissent and talk with its exiled opposition.

In return, Burundi has been staging anti-AU protests, targeting in particular the chairman of the organisation’s commission, Moussa Faki, whom it accuses of backing the opposition.

Participation in Amisom is a valuable source of hard currency, and the scaleback is likely to have a big impact on Burundi — every quarter, the AU pays it around $18 million (15.7 million euros).

The Amisom pullback was initially intended to be a gradual pro-rata reduction by each contingent to avoid financial shocks of these kind, the AU source said.

But as the Burundi troops are poorly equipped, it was then decided for operational reasons that the first phase of departures should be just the Burundi contingent, the source said.

However, a senior Burundi government official, speaking on condition of anonymity, said that the country viewed this decision with suspicion.

“We know that it’s a decision which was inspired by the EU in order to hurt Burundi, and unfortunately the AU had to accept it because it is a hostage of the Europeans, which are mainly financing (Amisom),” the official said.

The EU imposed a range of sanctions against Burundi in 2016, targeting individuals deemed to be undermining democracy, violating human rights and fomenting violence.