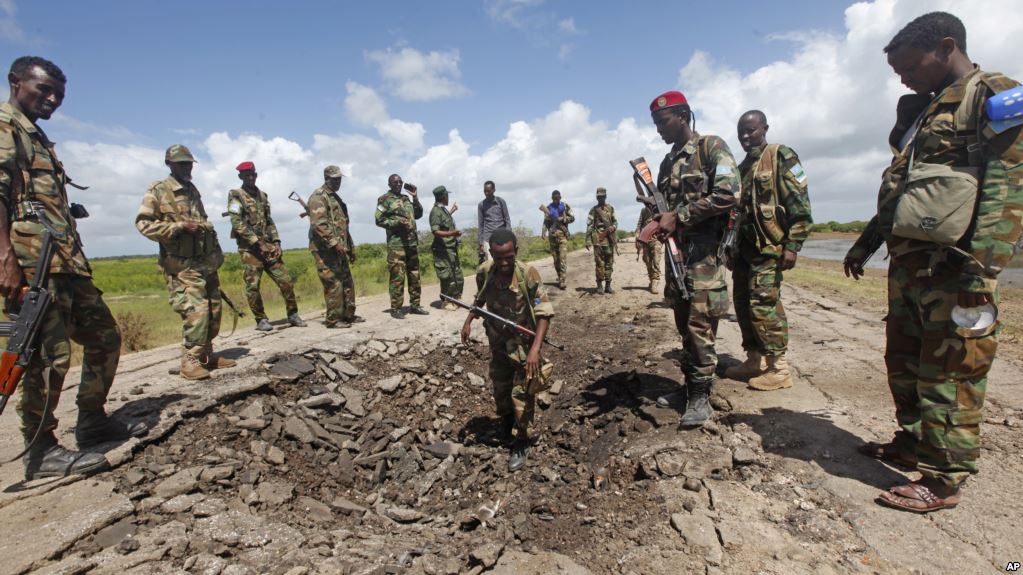 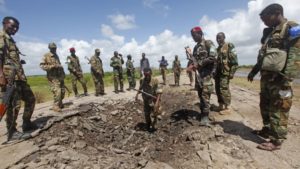 FILE – Somali soldiers stand at a Somali military base, near the site of an attack by al-Shabab, in Lower Juba, June 13, 2018. The base was the target of another al-Shabab assault Monday.

WASHINGTON — As the African Union Mission in Somalia (AMISOM) prepares to implement the planned phased withdrawal of more than 21,000 troops fighting militant groups, including al-Shabab and the Islamic State in Somalia, some experts are concerned that the country may not be prepared to take on the task in the face of growing political divisions and lack of military equipment and training.

As part of the first phase, AMISOM plans to withdraw about 1,000 troops by February 2019. The process of handing over responsibility of some forward-operating bases to the Somali national army has already begun.

The plan is to gradually withdraw all AMISOM troops from the country and hand over the lead security responsibility to local government forces.

The transition would occur based on the conditions on the ground and the preparedness of the Somali National Security Forces (SNFS), according to officials at AMISOM.

At a meeting in Nairobi, Kenya, in late August, the military operations coordinating committee of the AMISOM urged its commanders to conduct an operational readiness assessment of the Somali national army.

But some experts charge that the timelines are hard to follow and that it would take a longer process for AMISOM to withdraw from Somalia.

“I will be surprised if these timelines are held,” Omar Mahmood, a Somali analyst with the South Africa-based Institute of Security Studies Africa, told VOA.

“I think it’s going to be a much longer process than what people are really thinking about right now,” he added.

Mahmood said there has been some progress with the training of the Somali security forces, but they are unable to take on a leading role without international support.

“If you are talking about in terms of the whole security of Somalia, no, of course not. I don’t think the security forces are ready, but I think you need to start showing some signs of progress, especially because the issue is linked to AMISOM’s talk of withdrawal,” Mahmood added.

Paul Williams, an associate professor at George Washington University’s Elliott School of International Affairs, said he thinks the success of the process depends on accurate and calculative assessments on the ground.

“The effect is likely to vary depending on what type of forces AMISOM might withdraw, and where,” Williams told VOA. “If a relatively small number of troops were withdrawn on the basis of an accurate assessment of the al-Shabab threat, and the remaining forces are given better enablers (aviation, rapid reaction and ISR units), then the impact would likely be small or even net positive.”

Somali officials maintain that the country has made progress and that it’s in a better position to take on more responsibility for the security of parts of the country.

In May, Abdisaid Musse Ali, Somalia’s national security adviser, reportedly told a joint A.U.-U.N. delegation that he was assessing the situation in Somalia ahead of the planned transition of security responsibilities to the Somali security forces, and that his country should not be judged based on the past.

“The transition plan represents a significant change in the planning and delivery of security in Somalia. It is not business as usual,” Ali told the delegation, according to an AMISOM press release.

“We need to build a state, and building a state meant the Somalis needed to take responsibility not only of the military, but also of the administration of the country,”Ali added.

“Somali government officials indicated that the Somali security forces are now capable and ready for the gradual handover of security responsibility from AMISOM,” Faqi told VOA. “We must trust and support the government in this aspect.”

Somali security forces are currently being trained by AMISOM, Turkey, the United Arab Emirates and the EU. The U.S. military’s Africa Command is also helping with training.

“AFRICOM provides training and security force assistance to the SNSF, including support for intelligence, surveillance and reconnaissance to facilitate their efforts to target violent extremist organizations in their country,” U.S. Air Force Maj. Karl Wiest, a spokesperson for AFRICOM, told VOA.

“Our military actions, to include precision strikes against the al-Qaida-aligned, al-Shabab terrorist groups, as well as ISIS-Somalia, are done in support and with the concurrence of the federal government [Somalia],” Wiest said, using an acronym for the militant group, Islamic State.

But experts point to lack of coordination among these trainer countries, which leads to poor results on the ground.

Williams, the George Washington professor, believes that several international actors have spent a decade trying to build an effective national force in Somalia, but with little success.

Mahmood charges that because of the involvement of several external parties, individual units are often trained effectively. However, the macro-level training soldiers receive differs from unit to unit, depending on which country is involved, which undermines efforts of building a unified force.

“The individual trainings themselves could be very adequate, but it doesn’t necessarily mean that you are building a really unified force that can act in a cohesive manner,” Mahmood said.

Both Mahmood and Williams call for better coordination among countries that help train Somali soldiers.

Analysts such as Mahmood believe that the main obstacle to the creation of an effective national army in Somalia is the inability of the political class to reconcile with each other.

“There are just a high number of divisions — one at the clan level, and two at a sort of Mogadishu versus the federal member states, and so on,” Mahmood said.

“Right now, I think, what you have in some of the federal member states are militias or units that are really responding not to Mogadishu, but to their respective member state capitals,” Mahmood added.