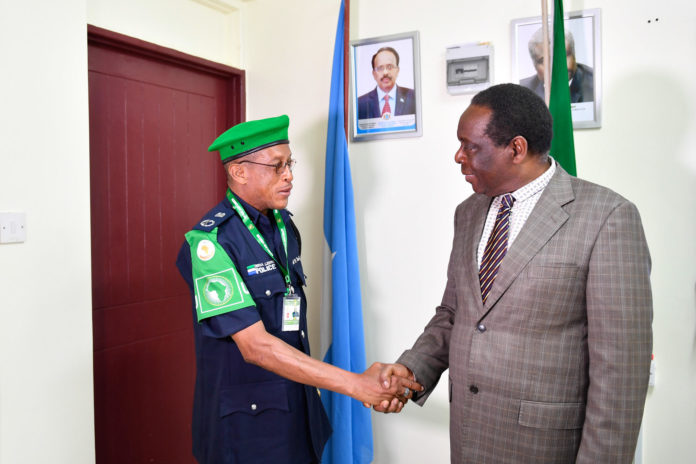 Mogadishu, CBA – The African Union Mission in Somalia (AMISOM) has a new Police Commissioner. Assistant Inspector General of Police (AIGP) Augustine Magnus Kailie, from Sierra Leone, arrived in Somalia on Wednesday to commence work and will lead AMISOM police component to implement its mandate to train, mentor, and advise the Somali Police Force (SPF) and support stabilization efforts under the Somalia Transition Plan.

AMISOM is implementing the transition plan, under which the mission will gradually hand over security responsibilities to Somali security forces and exit by 2021.

The Special Representative of the Chairperson of the AU Commission (SRCC) for Somalia, Ambassador Francisco Madeira, on Thursday met with the new Police Commissioner and congratulated him on his appointment.

“We have to help rebuild the police institution in Somalia, and ensure the delivery of quality services to the public,” said Ambassador Madeira who is also the Head of AMISOM.

Ambassador Madeira paid tribute to the Sierra Leone Police contingent under AMISOM, for the excellence and professionalism in implementing the AMISOM mandate.

AIGP Kailie noted that his appointment is an opportunity to reciprocate the support the international community provided Sierra Leone following the civil war from 1991 to 2002. “I am happy to pay back the support Sierra Leone received from various international organisations following the civil war. Their contributions were significant to our peace process,” he said.

AIG Kailie replaces Brig. Gen. Anand Pillay from South Africa, who left in November 2017. He comes with 30 years of professional experience in the Sierra Leonean Police Force, where he has served in various capacities.

Prior to his appointment as AMISOM Police Commissioner, he was the Head of the Operations Support Division (OSD), in the armed wing of the Sierra Leone Police Force. He holds a Master’s degree in Peace and Development.