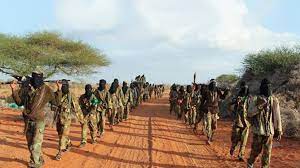 Al Shabab militants seized a strategic town of Mataban in central Somalia without facing any resistance from government troops, the militants also captured nearby towns.

Photos indicated militants brandishing their black flag and patrolling the streets of Mataban, some 100km south of Galmudug administrative seat.

The town changed hands between government troops in Ahlu Sunnah fighters months earlier, but has been quite as rival forces clash in nearby town of Guriel, which has returned to the hands of pro government regional authority.

Al Shabab confirmed that its fighters had taken Mataban after entering the nearby towns of Ba’da and Bergadid, all in Hiran region, though regional authority and Somali army have not commented on the development.