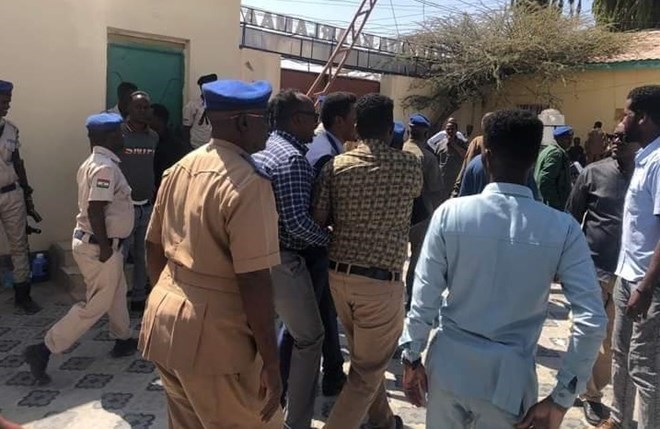 Gunfire was heard at Somaliland’s House of National Assembly on Monday after parliamentarians clashed with police officers deployed to break up a scuffle at the parliamentary premise, as tension was running high over the announcement by the information minister that the president had ordered the commencement of opening political organizations.

MP’s of ruling party Kulmiye refused to attend a session scheduled to take part on Monday, in which the parliament would debate on the president’s decision on formation of political organizations, which the opposition sees as an attempt to delay the upcoming presidential polls.

Two MP’s brawled outside the hall, exchanging blows and kicks as videos circulated on social media indicated other members of the parliament trying to ease fist-fight.

Videos shared by local journalists showed MP’s shoving officers out of the compound and closing in the gate as other soldiers fired live rounds, in one of the most chaotic scenes at Somaliland’s parliament known for its history of scuffles between MP’s.

The House Speaker, Abdirisak Khalif Ahmed, who comes from Wadani opposition party, accused the ruling party of meddling in the parliaments work and stressed that such moves could undermine the legislative body’s check and balances powers.

Leaders of opposition parties UCID and Wadani said on Sunday that president Musa Bihi’s decision could sway the country from its current election trajectory and warned that it could lead to a political crisis.