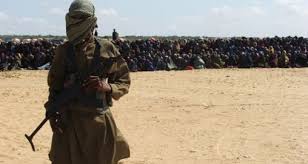 Al Shabab militia group on 29th April have executed three Somali men in Ceel Buur township of Galgudud region of Somalia on claims of spying. Al Shabab court sentenced the three Somali men to death penalty on allegations that they were spying the group’s activities on behalf of Africom-United State Africa Command. Al Shabab has said it publicly executed ,Ahmed Nurow Mohamed, 23, years-old Bashir Mohamed Dhagol, 22, and Bishar Ahmed Abdule, 50 at open area in Ceel Buur township. The Jihadist group said in a statement that the men were killed after confessing that they collaborated with Africom. They men were tied to poles in an open field and killed where women and children were in attendance of the execution.