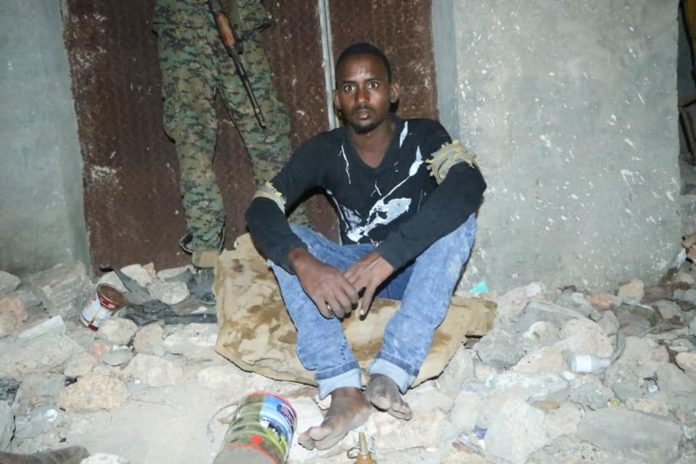 Several members of al-Shabaab millitant group have been arrested in the port city of Kismayu, Southern Somalia as they prepared to carry out attacks, this is according to Jubaland security forces and national intelligence agency of the federal government of Somalia.

Their aim was to not yet clear but considering the amounts of weapons and ammunition they carried, intelligence officers believe that their intention was attack public areas, religious events and hotels in the State’s capital Kismayu and other locations in Jubaland.

Jubaland security forces and national intelligence agency of the federal government of Somalia arrested these al-Shabab members in an operation conducted on Thursday evening.

The move comes amid Somali national forces are conducting major operations against the al-Qaida-affiliated group al-Shabab in central and southern Somalia.

The security forces carried out the operation in collaboration, raiding several houses to flush out Al-Shabaab suspects.

The security forces called on the public to continue working with them in order to eliminate the threat posed by militants group in southern Somalia.

Col Khalid confirmed that they have arrested two members of the militant group. “After a long operation which included information sharing between our agencies and the public, we managed to arrest two members of Al shabaab who have caused damages to the city”.

The Colonel said the two have brought into the city, explosive devices and other weapons.

Secuirity forces in country are closed working with Several countries who provided vital intelligence that helps arrest the militants, including the United States, Italy, France and Spain.

Al Shabaab has been fighting for years to topple Somalia’s central government, which the African Union-mandated peacekeeping force AMISOM helps to defend.

The militants have carried out numerous attacks in Somalia on military and civilian targets, and it has also conducted attacks abroad including in Kenya.