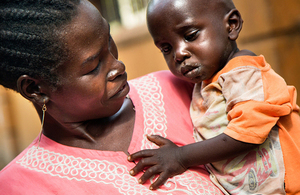 Priti Patel announces new packages of UK aid for South Sudan and Somalia and calls on others to step up as well.

The International Development Secretary Priti Patel has today announced new packages of life-saving UK aid for South Sudan and Somalia and issued a call to action to the international community to step up their support before it is too late.

Before this week there has been only one certified famine globally since 2000. Parts of South Sudan are now in famine and in 2017 there is a credible risk of another three famines in Yemen, North East Nigeria and Somalia. Drought and conflict in these countries are pushing families to the brink of starvation and there is also no end in sight to the six-year conflict which has ripped Syria apart.

As the world faces an unprecedented number of humanitarian crises, Priti Patel outlined how the UK will lead the world in supporting famine stricken areas. In response to famine warnings in Somalia and South Sudan she announced new UK support to provide lifesaving food, water and emergency healthcare which will save more than a million lives.

This is alongside continued life-saving aid to Yemen and North East Nigeria which provided food, medical supplies, water and emergency shelter to over two million people in 2016.

The world faces a series of unprecedented humanitarian crises and the real threat of famine in four countries. These crises are being driven by conflict and drought and we must respond accordingly. Our commitment to UK aid means that when people are at risk of dying from drought and disaster, we have the tools and expertise to avoid catastrophe.

In times of crisis, the world looks to Britain not just for our work on the ground, but also for our leadership internationally. While we step up our support for emergency food, water and lifesaving care to those in need, our message to the world is clear – we must act now to help innocent people who are starving to death.

In Somalia, more than six million people have no reliable access to food and there are 360,000 acutely malnourished children. All the signs are pointing to a famine as bad, or worse, than the one in 2011 which killed 260,000 people. The UK is acting now to prevent this.

Today’s announcement of new support to Somalia will provide:

In South Sudan, famine has now been declared and more than half the population is in desperate need. Almost five million face the daily threat of going without enough food and water and three million people have been forced from their homes because of ruthless violence and widespread rape. The UK is leading the way by providing:

In North East Nigeria, as Boko Haram is pushed out, we are increasing our humanitarian support. The UK is providing:

In Yemen, the UK is delivering life-saving aid to the most vulnerable people which included supplying food, medical supplies, water and emergency shelter to over one million people last year.

To stop famine spreading and help support stability in these regions the system needs urgent reform. The UK is pushing for a faster, more effective international humanitarian system fit for the 21st century, which is firmly in our interests.