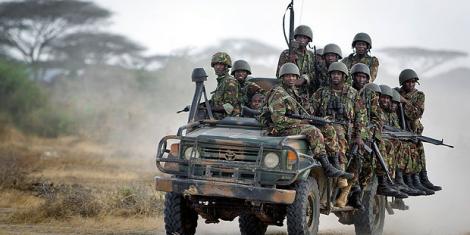 Tension is reportedly brewing up between  African Union Mission in Somalia (Amisom) commanders in Somalia and military chiefs in Nairobi over the withdrawal of Kenya Defense Forces (KDF) troops from Somalia.

According to reports by The Nation, Amisom commanders from other contributing countries have been uneasy about the Kenyans.

While speaking in low tones, they have accused the KDF of behaving like a big brother and demanding special attention within Amisom.

At the same time, sources indicate that Somalia citizens and leaders are a worried lot since they believe they are now exposed to Al-Shabaab threats.

About a week ago, Kenyan troops moved out of the Busar military base in Gedo region, the area which for years served as the KDF command centre in the northern sector of Jubaland.

The Bursar area is well documented as an area where the Kenyan military suffered its greatest loss in history following the El Ade attack, losing around 200 soldiers.

Following a UN Security Council resolution, Amisom’s strength was supposed to reduce from 22,126 uniformed personnel to 21,626 in December 2017.

Part of the UN resolutions was to have 1,000 troops withdrawn by February.

The Somalia Transition Plan, mandated by the UN Security Council Resolution 2431 (2018) sets priority activities to be undertaken by Amisom before the 2020/2021 one-person-one-vote election.

The election is supposed to lead to Amisom’s final exit from the country that was besieged by clan and civil wars from the early 1990s.