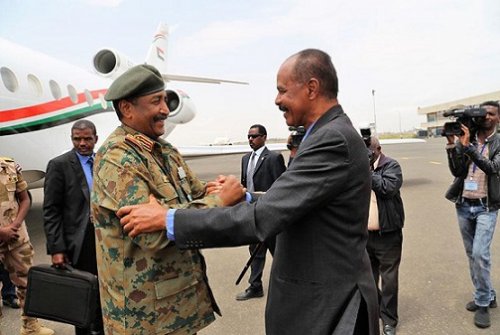 July 7, 2019 (KHARTOUM) – Khartoum and Asmara discussed on Sunday practical measures to open the border between the two countries and ways to normalize and boost bilateral relations.

In a meeting held at the presidency, the head of the Transitional Military Council, Abdel Fattah al-Barhan, and his deputy Mohamed Hamdan Daglo, Hemetti, discussed with the advisor of the Eritrean Presidential Adviser Yemane Gebreab, ways to develop and strengthen bilateral relations between the two countries.

Following the meeting, the Eritrean official told reporters that his current visit to Khartoum comes within the framework of mutual visits between officials of the two countries, continuing consultations, and the development and normalization of Sudanese-Eritrean relations after the decision to open the common border.

“Today’s meetings focused on examining the procedural aspects of opening the common border between Sudan and Eritrea,” he said.

On June 14, the head of Sudan’s military council, Abdel Fattah Barhan, visited Eritrea and agreed with President, Isaias Afewerki, to reopen the border and to facilitate the movement of nationals after its closure by the former Sudanese President Omer al-Bashir for a year and a half ago.

His deputy, Hemetti visited Asmara on 2 July at the invitation of President Isaias Afwerki.

It was purported that Afwerki wanted to discuss with Hemetti his plans to recruit people from the Kassala state which is inhabited by tribal groups in both countries.

Last May, Eritrea voiced concern about political stability in Sudan after the ouster of al-Bashir and dispatched its Foreign Minister Osman Saleh to Khartoum.

The visit of the Eritrean presidential adviser on Sunday was not announced by the military council. It is not clear how many days he will remain in Khartoum.

Ties between Sudan and Eritrea deteriorated in February 2018 after the border closure by the al-Bashir government as a result of mutual accusations of harbouring dissidents and feeding smuggling activities.

On April 11, Sudanese army leadership took over power and removed al-Bashir from office after 30 years in power under popular protests that began in December last year.