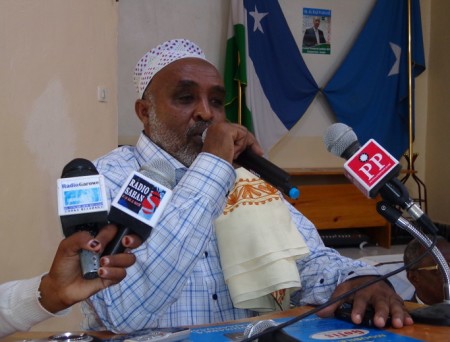 “Militias from Erigavo-based clan have taken control of Wadqari. We submitted a formal compliant with Ergavo based authority on the trespass into communal area. We traveled to Ergavo and stayed there for three months in the hope of resolving the disputed land problem.” said Sultan Bashir

“Before lodging the complaint, we have talked to the elders of the clan that launched an attack on Waqdari. They arranged that the problem should be resolved by inter-clan talks. We defied their plans because, the issues are specific to the two clans who involved a long standing interactions and have ties whose members know each other.”

Sultan Du’ale alleged that the intervention of Erigavo mayor in the form of an order to stop the construction of a Mother and Child Health Center at the occupied area and the withdrawal of the militias were not enforced so far.

“The mayor instructed militias not to comply with the withdrawal.”said Sultan Bashir It is not quite obvious that the Erigavo Mayor may acted partially in this case, the silence of the regional authority over the feuding and the mayor’s shared sub clan affiliation with militia that committed the trespass raise serious questions about the competence and commitment to protect communal agreements.

Sultan Bashir argued that land right of the sub-clans are clear. We have documents showing how the British Colony demarcated territories as for clans that have signed the Protectorate Agreement. The late Somaliland President Mohamed Haji Ibrahim Egal sponsored the Erigavo Communal Pact. The agreement liad the foundation for respect for citizens and property rights in Sanaag province.The Sultan has level serious allegations against the mayor Ismail of failing to live up to the duty to act impartiality to the citizens.The minister of interior of Somaliland has not so conducted an inquiry into Waqdari dispute.