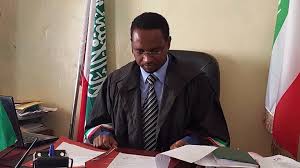 Hargeisa–The Supreme court in Somaliland has issued a new ruling which says that the hearing of blogger in detention to be tried in Hargeisa provincial court rather than his case to be tried in his hometown, Burao.

Mr. Mubarik Abdi, the blogger’s lawyer has confirmed that the constitutional court has reached the decision to hold Abdimalik’s hearing case in Hargeisa after the office of attorney general and criminal investigation department request demanding that the blogger’s case should be transferred in Hargeisa.

The attorney general and the criminal investigation department have based their decision of case transfer due to security concerns. The provincial court in Hargeisa will issue a ruling on the blogger who is facing allegations of defamation from Abaarso Tech school in Somaliland. Security forces apprehended the blogger a couple of days ago after he hid from the law enforcement agencies for months which were seeking his arrest.