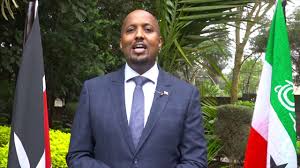 Somaliland head of mission to Kenya, Bashe Awil has repudiated speculations circulated by Somalia’s government which cliamed that he was detained in Nairobi for unconfirmed charges.

In a bid the head of a liaison office to Kenya, Bashe Awil has released the statement to set the record straight.

“It happens that when the political door closes, and the lies come to an end, they try to confuse the public, they use falsehoods and drama to distract.” Said the Ambassador Bashe Awil.

The Ambassador addressed the Somalia public separately and expressed his respect for them, but told the government to stop lying to its people.

“I am not arrested, but for the last two months I was sheltering in place in the United Arab Emirates, due to COVID-19.” Said the Ambassador.

“ I am the Honorary Representative of the People and Government of the Republic of Somaliland. The governments of Kenya and Somaliland have a long standing relationship, dating back to the 18th century, and today, that relationship is at its highest levels. “concluded Ambassador Awil.